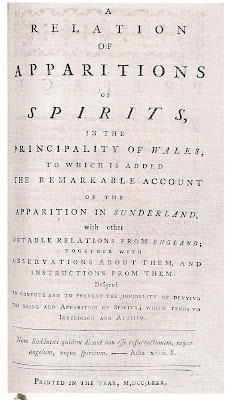 Here are three folklore snippets from a wonderful book called 'The Appearance of Evil: Apparitions of Spirits in Wales': edited with an introduction by John Harvey and published by the University of Wales Press, 2003.

Edmund Jones (1702-93) was an 18th century Welsh Dissenter, a minister and preacher who travelled  'on horseback and on foot, throughout Wales and his seventy years of service across, what he considered, a cursed and pestilent landscape infested with the emissaries of darkness.' His book, A Relation of Apparitions of Spirits in the Principality of Wales, published in 1780, was not written from what we now consider the usual motives for collecting and preserving folk tales and traditions.  Instead, Jones regarded the tales and incidents he collected (and frequently also experienced) as evidence of the genuine existence and interference of the supernatural and diabolical in everyday life - and hence, also, evidence for the truth of the gospels. (His argument, roughly, was: if bad spirits exist, as stated in the Bible, then so does God.)

I have given the extracts titles.  All page numbers are taken from the 2003 edition.

About the year 1748, J W James was going by night from Bedwas (with a young woman whom he pretended to court) towads Risca church-wakes on horseback.  Before they came over against Certwyn Machen hill (the east side of it facing the parish of Risca) they could see the resemblance of a boy going before them part of the way.  They suspected, by something in the appearance, that it was  not a real boy - as, indeed, it was not - but a hellish dangerous boy, as it soon appeared.  For while they looked upon it, they could see it suddenly putting its head between its legs and, transforming into a ball of light, tumbling a steep way towards the Certwyn, which is the top of the high Machen mountain - it being as easy for a spirit to go up as to come downhill.
(p 103)

THE GIANT WOMAN
Once, coming home at night from Abergavenny, Thomas Miles Harry was much oppressed with fears (as is usually the case before the appearance of evil spirits) in the way, when near home. His horse took fright, it seeing something he did not, and ran violently with him towards the house. Nor did Thomas’s fear cease when he was by the house. He was afraid to look about (expecting to see somewhat) and hastened to unsaddle his horse. But happening to cast his eye towards the other end of the years, he saw the appearance of a woman so prodigiously tall as to be about half as high as the tall beech trees at the other side of the yard. Glad was he of a house to enter in and rest.
(p 77)

THE FAIRY FUNERAL
A certain man in a field, burning turfs, saw the fairies coming through the field where he lay blowing the fire in one of the pits. They went by like a burial, imitating the singing of psalms as they went, and, doubtless, the very tune sung at the approaching funeral.  One of them leaped over his legs.  He rose up to see where they would go, and followed them into a field that led into a wood.  Soon after, a real burial came through the field, and he lay down by the pit of turfs to see what they would do. One of the company actually leaped over his legs in passing by, just as the fairies had done before.  They also sung psalms at the burial, as the fairies foreshadowed.
(p 58)