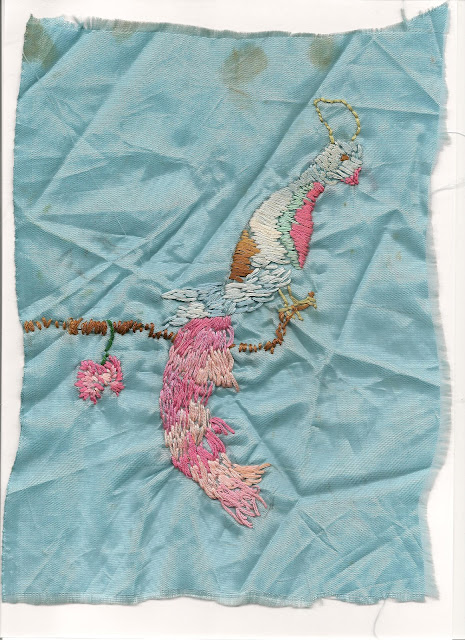 I'm lucky to have the sort of mother who never throws things out - at least, not things her children have made, no matter how long ago or how badly.  I was over at her house the other day, helping her go through drawers, and out of one of them emerged this rather sorry-looking embroidered bird.  I'll explain more about him in a minute.

In Chaucer’s time, the word for a poet or author was ‘a maker’ - as witness the Scots poet William Dunbar’s luminous ‘Lament for the Makers’, in which he lists poet after poet taken by ‘the strong unmerciful tyrant’, death:

‘He has done piteouslie devour
The noble Chaucer, of makers flower;
The Monk of Bery, and Gower all three:
Timor mortis conturbat me.’

(In fact, damn it, go and read the poem first, and come back and read this after you’ve done.)

‘Maker’: I’ve always liked it. It’s less high-falutin’ than ‘author’ or ‘poet’: it links us inextricably – as we ought to be linked – with every other sort of human creativity. People make furniture. We make paintings, musical instruments and gardens. We make brain scanners, television programmes and films. We make homes. We make love – which as Ursula K Le Guin once wrote in the ‘The Lathe of Heaven’ (go and read that too), ‘doesn’t just sit there like a stone; it has to be made, like bread; re-made all the time, made new.’

None of these things (furniture, gardens, brain scanners etc) just happen. You can’t make anything worth having without a great deal of effort. I should know, because every spring I spend days digging weeds (mainly bindweed roots: thick, white, snappy coiling things) out of my flower beds. But what a difference the work makes when summer comes!

Children love to make things, and they ought to be encouraged to do so and praised for the results - even if the results aren't perfect in some adult, idealistic, Platonic sense. Writing is 'making something' just as much as modelling with clay or painting a picture: and primary school children especially ought to be allowed to experiment and have fun and feel proud of themselves - not to be marked and judged and compared and made to feel unskilled and inadequate. My brother and I were part of the Blue Peter generation, and he was fantastic at making things out of Squeezy bottles and cornflakes packets. He went on to construct model planes that really flew, and can now turn his hand to just about anything, including boats, house extensions, and beautiful, glossy musical instruments like mandolas. He’s become an accomplished folk musician who can compose his own tunes.

Me, I tried. I longed to own a model sailing ship, so I made my own very ugly one out of balsa wood (d'you remember balsa wood, light and fragile, and soft enough to be cut with scissors?) and painted it yellow. It had so many holes in the hull, it would have sunk like a stone, but I made it and loved it till it was squashed flat in a house removal by heartless, careless men from Pickfords. I longed to own an exquisite piece of Chinese embroidery I’d seen framed in a big house, smothered in birds and flowers – so I found a bit of frayed blue satin and laboriously stitched away.  And the result?  The puckered, lumpy, clumsy bird at the head of this post.

I wanted a miniature Chinese garden like one I’d read about in a book – so I borrowed a tray and arranged gravel and stones and moss around a tin lid (for the pool) and stood some china ornaments around it till the moss dried and the tray got knocked over. Oh, and I wanted an eighth Narnia book, so I got an old blue notebook and wrote my own. Here it is: 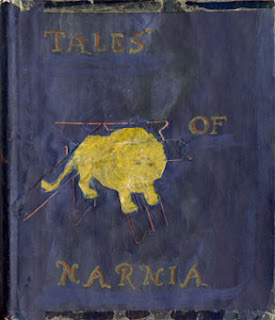 (You can see more of it on my website.) And although none of the things I made may have been any good by some unrealistic ultimate critical standard, it was the making that counted.

Even while I was making it I knew perfectly well that my embroidered bird fell short - far, far short - of the beautiful thing I'd seen and wanted to copy.  And no, I never became any more competent with a needle than that.  But at least I tried to be a maker. For me, the writing is what has lasted. I’m not an embroiderer or a woodworker or a musician. I'd love to be, but I know I haven't the time or the patience to learn the craft.  And that's the thing - going back to Chaucer again: 'The lyf so short, the craft so longe to lerne'.  When I'm writing I can't begin to tell you how many times I rewrite every page, every sentence. We - children - all of us - need to try lots of different things, so that we can figure out what to concentrate on, what to practice and get good at.  But it's all making, all of it! and any child who hammers a nail in straight, paints a picture or bakes brownies knows how good it feels.

Here’s a poem by Robert Bridges which says it all, really - the aspiration, the delight, and the inevitable falling short.  But isn't that why we pick ourselves up and try again?

I love all beauteous things,
I seek and adore them.
God hath no better praise,
And Man in his hasty days
Is honoured for them.

I too will something make,
And joy in the making,
Although tomorrow it seem
Like the empty words of a dream,
Remembered on waking.

Posted by Katherine Langrish at 01:44