I was saddened to hear yesterday of the death after a short illness of the wonderful New Zealand writer Margaret Mahy.  She was 76, and in this day and age that's young... and Margaret Mahy was a writer who knew what it's like to be young.  She wrote with insight and brilliance for all ages, from young children ('A Lion in The Meadow', 'The Downhill Crocodile Whizz') to young adults ('The Haunting', 'The Changeover', 'The Other Side of Silence'), and to call her a fantasy writer is only to begin to indicate - to anyone who hasn't read them - the individuality of her books. 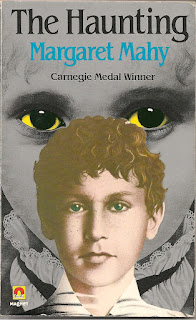 'The Haunting', which won the Carnegie Medal, was the first of her titles which I ever read - back in 1982 - and I was inexorably drawn in from the first paragraph:

When, suddenly, on an ordinary Wednesday, it seemed to Barney that the world tilted and ran downhill in all directions, he knew he was about to be haunted again.  It had happened when he was younger, but he had thought that being haunted was a babyish thing that you grew out of, like crying when you fell over, or not having a bike.

But Barney's Great-Uncle Cole has died - and Barney is about to be haunted by the apparition of a mysterious child in a blue velvet suit who repeats: 'Barnaby's dead!  Barnaby's dead - and I'm going to be very lonely.'  As the apparition appears any time, anywhere,  Barney becomes convinced that his dead uncle is sending him messages:

When he opened his eyes first thing in the morning he had seen through his window not the shaggy Palmer lawn and hedge, but a forest filled with glittering birds and dark red flowers, which had slowly faded to let the usual scene show through and take over.  The blue milk jug on the table had wavered into another shape - a head, covered with tight blue curls and a dull bluish skin, crowned with a chain of gold leaves and berries.  Its lips had moved, saying words he could not hear, and had then given him a terrifying smile.

It's so vivid it could be too frightening if it weren't for the fact that, as in most of Mahy's books, the child protagonist is not alone but surrounded by a large, charming, scatty but supportive family, whose members do their best to help him.  As Barney's stepmother says, defending him against the power that threatens him:

"He's mine all right!  Everyone in this family belongs to everyone else - belongs with everyone else, rather.  I've looked after him for a year now - ironed his shirts, made his school lunches, told him stories. ... But what matters most is that he wants to be ours, and he doesn't want to be yours.  That's what counts."

I'm sad she's gone. But at least I can go and read her books again. Fortunately there are many to choose from and I know they'll bring me wisdom and delight.

Posted by Katherine Langrish at 00:43

Email ThisBlogThis!Share to TwitterShare to FacebookShare to Pinterest
Labels: Margaret Mahy, The Haunting