Folklore Snippets: The Fisherman and the Merman

The Fisher and the Merman
From Scandinavian Folklore, ed William Craigie, 1896 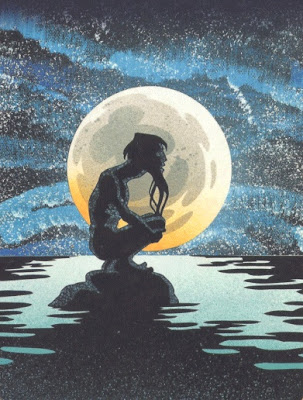 Here’s a nice story about inter-species co-operation and the gratitude that follows a good deed. One good turn deserves another…

One cold winter day a fisherman had gone out to sea.  It began to grow stormy when he was about to return and he had trouble enough to clear himself. He then saw, near his boat, an old man with a long gray beard, riding on a wave.  The fisherman knew well that it was the merman he saw before him, and he knew also what it meant.  “Uh, then, how cold it is!” said the merman as he sat and shivered, for he had lost one of his hose. The fisherman pulled off one of his, and threw it out to him.  The merman disappeared with it, and the fisherman came safe to land.  Some time after this, the fisherman was again out at sea, far from land.  All at once the merman stuck his head over the gunwale, and shouted out to the man in the boat,

“Hear, you man that gave the hose,
Take your boat and make for shore,
It thunders under Norway.”

The fisherman made all the haste he could to get to land, and there came a storm the like of which has never been known, in which many were drowned at sea.

Posted by Katherine Langrish at 01:55