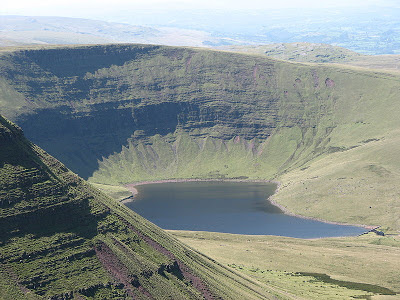 It's more than a year now I’ve been on the road. I’ve spent most of my adult life in other countries than the one I was born in. I’ve been reading and writing fairy tales for as long as I can remember.

Sometimes I blame fairytales for my longing to travel and encounter unknown people and places. Many fairytales involve journeys: across mountains of glass, forests of thorns, the seven miles of steel thistles of this blog’s title. And of course the tales themselves travel; versions of ‘Cupid and Psyche’ appearing in Scandinavia, Japan…

Even more stories involve a meeting between the ordinary and the unknown; indeed, isn’t that where their name comes from – fairy or faerie, that other realm that is so like our own but so utterly different. Some of my most-loved fairytales, the ones that have worked their way into my life and writing, are about encountering the new and strange, and falling hopelessly in love with it.

I don’t know where I first read or heard ‘The Lady of Llyn y Fan Fach’. It seems I’ve always known the story. But I came across it again on a neglected bookshelf in Kiev, in a book of folk tales from the British Isles bizarrely published – transcribed regional accents and all – in the Soviet Union.

I seized on this book like a piece of home. I was sharing my life with a man from a different country, a stranger in his strange land. Sometimes I felt like I was living in a fairytale. I felt like the lady of Llyn y Fan Fach.

In this Welsh tale, a shepherd by the lake in the Black Mountains sees a beautiful woman appear on the water, and falls in love. He woos her with his lunch, bread his mother baked, and finally wins her on the third try with bread that is neither over- nor under-cooked. The lady – fairy or goddess or just a stranger from a strange land, we are never told – agrees to live with the man until he strike her ‘Tri ergyd diachos’ – three causeless blows.

What happens next is a paradigm of a marriage.

The first time, they are late for a christening and the lady says she will fetch the horse to ride there if her husband brings her gloves. But when he comes back with the gloves she hasn’t brought the horse, and he strikes her.

The second time, the shepherd strikes her at a wedding after she starts weeping loudly “because these people are entering into trouble”.

The third time she begins to laugh uncontrollably at a funeral, because, she says, death puts people out of their pain. And he strikes her.

‘She then went out of the house saying, “The last blow has been struck, our marriage contract is broken and at an end. Farewell!”’

For me this story is about the encounter with the unknown, its fascination and its incommensurability. Maybe the lady knows the marriage will end in unhappiness – usually in fairytales when someone is told not to do something or else, you know they’re going to do it. But she marries the shepherd anyway. Maybe she is as charmed by his difference as he is enchanted by hers; the story doesn’t tell.

Yet the lady’s differences from her husband are not really between fairy and mortal. They’re the yawning gaps in understanding between two people.

The first time is a classic scene of family frayed tempers. The annoyed husband strikes her gently enough (it’s always emphasised that his blows are gentle) because she broke a promise and lied to him, however frivolously; suddenly she is not what she seems.

The second time, he must be baffled and embarrassed by her strange behaviour at the wedding – and maybe wondering what she is trying to say about their marriage.

The third time, at a funeral, he is surely shocked by the apparent heartlessness and bad manners of this person he can’t understand.

How can you ever causelessly strike the one you love? But the moment comes, the gap opening at your feet as you realise this person you love and think you know is a stranger; a liar, a laugher at funerals and a weeper at weddings, someone you simply do not know. You teeter on the brink of the pit; that’s when you lash out.
There is a lovely, wise, updated Joan Aiken version of the Welsh story, called ‘The People in the Castle’. The anti-social village doctor falls in love with the lady’s silence and mystery, and is disappointed when after moving in with him she turns out to be a sociable, movie-loving chatterbox. It’s as if he’s married a swan, only to find out she is just a girl in a feather dress.

That brings me to those stories in which people marry beings who are literally not what they seem: the white bear who is actually a prince; the frog who is Vassilisa the wise and clever under a spell – stories that retell ‘Cupid and Psyche’.

Very often it’s glimpsing this truth sooner than they should, through curiosity, impatience or embarrassment (everyone thinks I’m married to a frog/a bear/something I can’t even see – the humiliation!), that parts couples and sends the heroines or heroes off on their travels across glass mountains and forest of thorns to bring their beloved, in his or her true form, back home.

Those are the optimistic stories.

The pessimistic version is that harsh lesson in not knowing and curiosity, ‘Bluebeard’s Castle’, in which the wife discovers her husband is hiding the dead bodies of his previous wives. A more mixed (and gender-reversed) Russian version tells of Queen Marya Morieva and her husband Ivan, who however much he loves her can’t resist opening the forbidden cellar door. Out comes Koschei Deathless to chop Ivan into pieces (“Let him chop!” says Ivan recklessly, “for if I can’t live with you, Marya Morieva, I would rather not live at all.”)

“If you had only waited and not peeked,” reproach these secretive lovers who are not what they seem. “If you had only listened to me and not opened the door.” A trust has been broken, and hardship and separation ensues.

In many stories, the love, courage and ingenuity of the heroes or heroines ensures reunion, and a traditional Happy Ever After. Through these journeys to find their lovers (or more rarely siblings or parents), people discover themselves; no longer passive partners being married off or carried off, but actively seeking happiness.

Other stories suggest that the whole of another person is, in the end, impossible to grasp. And if we can’t accept the ultimate unknowability of the one we love, then we are destined to live forever apart. Like the Gaelic seal bride, who always finds her seal skin however the husband hides it, and goes back to her unknowable life in the sea. Like the Japanese Sea King’s daughter in the tale ‘The Sea King and The Tide Jewels’, who leaves forever when her husband discovers her true, truly other form is that of a dragon.

Joan Aiken takes pity on her Welsh doctor, and has the mysterious lady return to him one night. The Lady of Llyn y Fan Fach never comes back. She does show herself to her sons though and teaches them medicine, thus rooting the tale in historical reality since these sons established a line of famous Welsh physicians that continued till the 18th century.

I won’t tell you the end of my own story with a beloved from a different land. But it’s only in writing this reflection that I’ve realised one of my novels, a sequel to Riding Icarus, tells just this kind of fairytale journey.

The heroine, Masha, runs away from her mother, who is traumatised from an unwilling journey into the realities of trafficking, and sets off on her own journey across Siberia to Kamchatka and her absent father. There Masha meets a rat who is really a boy; she discovers her father is not what he seems – or what she wants him to be. In the end she realises the purpose of her journey wasn’t what she thought at all; really it is the true form of her mother she was trying to find and to rescue all the time. Her mother as a complicated, vulnerable person in her own right; someone Masha has to get to know just as in turn her mother has to get to know her, while both accepting there are things they will never truly understand about each other.

My editors thought the ending of this book wasn’t Happy Ever After enough for its intended young adult audience.

But where is the real fairytale, the happy magic, in a story like ‘The Lady of Llyn y Fan Fach?’

Maybe in this: we can never truly know, but despite and because and anyway, how much we can love… 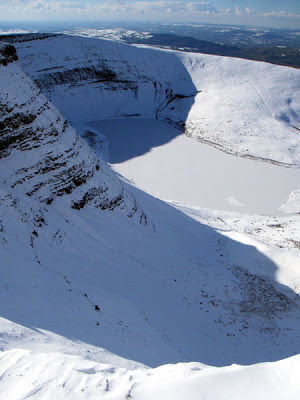 LILY HYDE has travelled through Russia, the Ukraine and the Crimea, China and Tibet:, and we first met online when she sent me an irresistable email:

I have to tell you this – I’m in Tagong, which is a tiny town high in the grasslands on the edge of the Tibetan plateau, full of monasteries and prayer flags and yaks and swaggering cowboys holding hands, wearing Stetsons, and with silver and coral rings in their black plaits… and in the hostel where I’m staying I found a copy of ‘Troll Fell’! I thought you’d like to know how far your words have travelled (further away from the sea than the Vikings ever got?)

Lily’s first book, ‘Riding Icarus’, is the enchanting story of Masha, who lives with her grandmother in an abandoned trolley-bus (called Icarus), ‘on the very edge of Kiev, by the Dnieper River. With no overhead electric wires to fix onto, the two long springy rods attached to the roof waved in the air like antennae, forever searching for a new source of power on which to drive away.’

Masha’s father went away to Kamchatka four years ago, and then Igor, her mother’s ‘friend’, appears:

Igor, who told Masha to call him uncle even though he wasn’t, and who had found Mama a job abroad where she could earn lots of money. So Mama had gone to Turkey, leaving Masha with Granny.

The story, while rooted firmly in modern Kiev, develops into a tale of magical midsummer wishes and your heart’s desire, dancing Cossacks, mystical tigers, the power of love and friendship, and an exceedingly nasty and all-too-believable villain. Lily writes with a sure but delicate touch, and the serious theme of people-trafficking is clearly hinted at without ever becoming too heavy for younger readers. Lily's second novel for children is 'Dream Land'.

Lily blogs at This Trolleybus is Going East.