Magical Classics: 'The Wolves of Willoughby Chase' by Joan Aiken 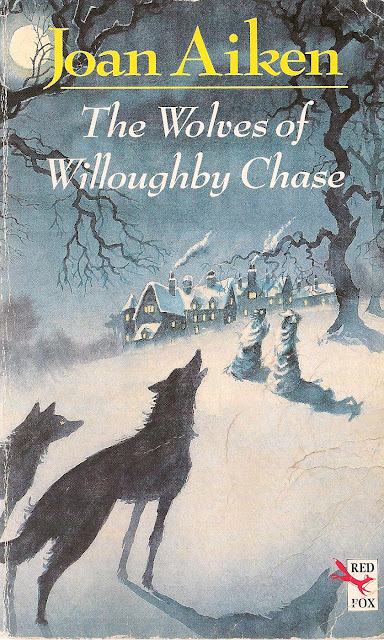 A grand house, a pack of hungry wolves and two brave and resourceful girls – this is the opening to one of the most magnificent children’s books ever written: a tapestry of skulduggery and deception, petty forgery and outrageous bravery, woven together with shining golden threads of thought-provoking fantasy. It’s also a tale of innocence and experience that William Blake would have been proud of.

Within seconds of the first meeting between Bonnie Green and her terrifying new governess, it is clear that Miss Slighcarp intends to rule Willoughby Chase with an iron rod. Bonnie’s days of ice-skating in the frozen park and bouncing on the window-seat cushions in a cosy, firelit nursery are unmistakeably numbered. It is no surprise, then, that Bonnie dreads the moment her parents will leave home to embark on their ocean voyage, but she must take comfort in the hope that a friendlier climate might improve her mama’s health, and in the knowledge that soon her cousin will soon arrive from London to keep her company.

Ensconced in the chilly carriage of a train hurtling north, ever closer to Willoughby Chase, Sylvia Green has problems of her own as – horror of horrors ­– she is joined in the carriage by a fellow passenger, the alarmingly genial and kind Mr Grimshaw. His very presence means that genteel Sylvia cannot even nibble one of the hard, tiny bread rolls her dear Aunt Jane packed for the journey, and propriety certainly forbids accepting one of the oozing violet cream pastries Mr Grimshaw is so eager to press upon her. But outside the train carriage a fiercer danger stalks the snow and ice, for the wolves are baying with hunger and desperate enough to attack, and it quickly becomes clear that Mr Grimshaw is not quite what he seems. Joan Aiken is tremendously skilled at pinpointing the very real fears of children: Sylvia’s anguish at having to share her train carriage with a jovial and chatty stranger struck a deep chord with me when I was a child, and was a more frightening notion than Miss Slighcarp and the wolves combined. Mr Grimshaw’s dripping, sugary cakes were especially disturbing – so tempting, and yet every child knows never to accept food from strangers. Oddly, I didn’t find the wolves attacking the carriage scary at all.

The Wolves of Willoughby Chase is not only a classic, it represents a new beginning, and I think it may contain one of the first examples of steampunk in children’s literature. I first discovered the novel when I was about ten or eleven years old, but I had no idea that I was encountering the first flowering of a genre that was to rule children’s fiction in later years. I do remember being fascinated by a matter-of-fact foreword explaining that the action takes place in a Jacobean period of history that “never happened”, with a fictional King James III on the throne, and a newly opened Channel Tunnel the unintended conduit of hungry wolf-packs from mainland Europe. The real Channel Tunnel was still under construction when I first read the novel, and I still remember trying to picture what it would be like filled with horses and carriages. In fact, one of the first things I loved about The Wolves of Willoughy Chase is the way Joan Aiken renders the real world just a little bit strange and unusual. The grandeur and opulence of Bonnie’s home is already an exciting contrast to the genteel poverty of the life Sylvia has just left behind, as well as the more humdrum world of most children reading the book, but of course it doesn’t end there. There are wolves. This just doesn’t feel like fantasy of the same ilk as the wonderful novels by Tamora Pierce that I gobbled each week at the library, because of course it’s not. In truth, Aiken’s flights of fantasy are perhaps more strictly magic realism – they are always used to make a point, to escalate a moment of fear. The wolves of Willoughby Chase come to embody the danger gathering around Bonnie and Sylvia as Miss Slighcarp destroys their world piecemeal – it’s as if the wolves and the steampunk Channel Tunnel that allow them to exist in the novel actually represent the girls’ loss of innocence, and perhaps also a loss of innocence on a wider, social level as the action moves from the rural grandeur of Willoughby Chase to the harsh, dark world of industrial Blastburn.

Joan Aiken’s use of fantasy and steampunk is a lesson in kind for any author – she uses these elements with such obvious pleasure, but the wolves and the other touches of fantasy don’t exist purely for their own sake – they lend wings to the story as a whole, intensifying emotion and crystallising moments of tension with the kind of authorial magic that is utterly compelling, and which only emerges once or twice in a generation. I’m delighted to have made the discovery that The Wolves of Willoughby Chase was just the first in an entire series. I only wish I had known the rest of the books as a child – still trailing clouds of glory, as William Wordsworth might have said, more or less, anyway. It really is no exaggeration to say that I would give this book to any child.

Katy Moran  is the author of several YA historical fantasies including Bloodline and Bloodline Rising , set in Britain and Constantinople in the Dark Ages, and Spirit Hunter, a tale of danger and forbidden love along the ancient and mysterious Silk Road.  Katy has also published Dangerous To Know, a modern love story for the festival-going generation. Her latest YA novel Hidden Among Us (Walker 2013) is a compelling faerie fantasy set in contemporary Britain, and I can highly recommend it.

Posted by Katherine Langrish at 01:02