Magical Classics: 'The Exploits of Moomipappa' by Tove Jansson 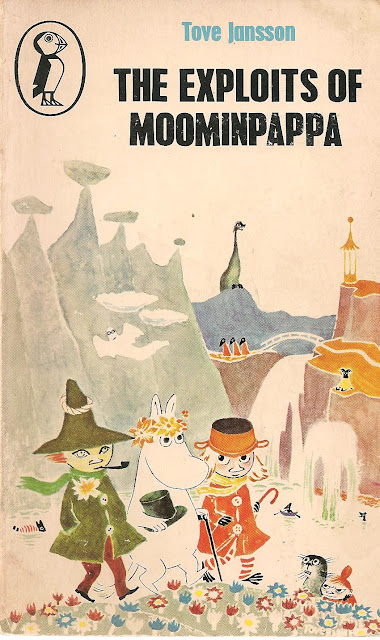 Catherine Butler enjoys the wisdom, joy and occasional melancholy of the gentle Moomins

The Exploits of Moominpappa (1952)

I came rather late to the Moomins, reading Tove Jansson’s books for the first time only when my own children were small, but I have the zealotry of the convert. For those who have not come across them, a quick way to convey something of their quality might be “Winnie-the-Pooh as written by Jean-Paul Sartre”. Like Pooh, Moomintroll and his friends – who include a wide variety of creatures, not just the hippo-like Moomins themselves – inhabit a rural arcadia of sorts. Their adventures are amusing and apparently inconsequential, although those that take place in Moominvalley tend to be more dramatic and (on occasion) magical than those in the Hundred Aker Wood. The Moomins are given to philosophizing on family, freedom, happiness, friendship and other important topics, but this is an arcadia that can show a bleaker face than Milne’s, one subject not only to floods and snow but to comet strikes, in which depression (not just Eeyore-ish lugubriousness) is a felt presence, and in which even death casts a bony shadow. If you are familiar with Jansson’s writing for adults, such as The Summer Book, you will find the same poetic, lapidary wisdom in Moominvalley, as well as the same setting on the Gulf of Finland, where midsummer days last round the clock and midwinter barely sees the sun.

Most Moomin fans have their favourite character. For many it is Snufkin – the placid and self-sufficient friend of young Moomintroll, who likes to spend the summers with his friends in Moominvalley but is also happy in his own company, and roused to anger only by petty displays of authority (park keepers and Keep Out signs being particular bugbears). For others it will be the minute but indomitable Little My, an atom of energetic, unsentimental feistiness. I too love Snufkin, and Littly My hangs (in plush form) from my rear-view mirror, but I also have a particular fondness for Moominpappa, the top-hatted patriarch of the Moomin family. Like several middle-aged males in children’s literature (think Bilbo Baggins, think Ratty with the Old Sea Rat) Moominpappa is perpetually torn between the instinct for domesticity (he cannot settle anywhere long without building a Moominhouse) and the call to the open sea and adventure, epitomized in his desire to join the mysterious and mute Hattifatteners in their endless ocean journeying.

In the early Moomin books Moominpappa watches benignly over the family’s adventures, leaving most of the work to the preternaturally accommodating Moominmamma; later, in Moominpappa at Sea, he succumbs to depression and something of a mid-life crisis. The Exploits of Moominpappa* (first published 1952) sits somewhere between these two phases. Set in high summer, is a retrospective book that nevertheless shows Moominpappa in festive mood, with an ending (I will not give it away) that absurdly and triumphantly redeems the time of his youth. Unlike the other Moomin books this is told largely in the first person, with Moominpappa sitting down to write his life-story up to the moment of his fateful meeting with Moominmamma, and stopping occasionally to read chapters to his son Moomintroll, Snufkin and their friend, the anxious and querulous Sniff. 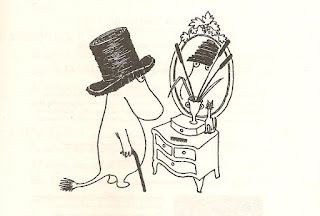 As a narrator, Moominpappa has something of Boswell’s bumptiousness and hunger for praise, combined with the blithe lack of self-awareness of an Oswald Bastable. We follow him as he escapes from the orphanage where he has been raised by a humourless Hemulen (aren’t they all?), and watch as he gathers a collection of friends as eccentric as himself, including practical, taciturn Hodgkins; Hodgkins’ flighty nephew, the button-collecting Muddler; and the free-spirited Joxter. Together they travel the ocean on a houseboat which (being both a house and a boat) combines Moominpappa’s contrary desires in one. Their journey takes in adventures with snout-devouring Niblungs, the icy and fearsome Groke, the gigantic but slightly less fearsome Edward the Booble, a Hemulen Aunt with a passion for multiplication contests, an Autocrat addicted to practical jokes, and a domesticated ghost who delights in talk of bones and dire revenges.

Exploits is not the place to begin with the Moomin books: for that I would recommend Moominsummer Madness or Finn Family Moomintroll, where you will be introduced to the major characters and get a more general feeling for Jansson’s world. However, if you prefer the Odyssey to the Iliad, or if The Voyage of the Dawn Treader is your favourite Narnia book, then this journey too will hold a special place in your heart, and I can only echo what Moominpappa writes in his foreword:

I believe many of my readers will thoughtfully lift their snout from the pages of this book every once in a while to exclaim: “What a Moomin!” or: “This indeed is life!”

* There is a later version of this book called Moominpappa’s Memoirs, which differs from Exploits in some small but – for Jansson completists – significant respects. Both, however, are well worth reading!

Catherine Butler is the author of some half dozen fantasy novels for children and young adults, as well as being Associate Professor of English Literature at the University of the West of England, where she specializes in children's literature. She has lived in Bristol since 1990, has two children (one grown up and one well on the way), and is currently trying to learn the piano and Japanese, though not in combination. She has edited a collection of spooky winter stories, Twisted Winter (A&C Black 2013).

Posted by Katherine Langrish at 01:40