This Russian fairy tale, collected by Ivan Khudyakov in the 1860s (and rather clunkily titled ‘The Stepmother’s Daughter and the Stepdaughter’) is outlined in ‘Russian Folk-Tales’ translated by WRS Ralston (1873). Ralston quotes just a couple of paragraphs of the story and merely summarises the second half. I cannot source any other English translation, so since it’s quite clear what happens and it’s a great story, I’ve filled in the outline.

The basic motif (AT 480: ‘The Kind and the Unkind Girls’) is common to many fairy tales: the Grimms’ ‘Mother Holle’, Perrault’s ‘Diamonds and Toads’, and the Scots tale ‘The Well at the World’s End’(#16 in this series)  in this series are good examples. Are these heroines 'strong'? In what way are they not? They deal with their own problems in their own way. Men are quite unimportant in this type of tale, rarely even making an appearance: the message is that kindness, courtesy and hard work will be rewarded with riches, not marriage. Anyway, the details of this particular version are so peculiarly sinister, I can’t resist including it.

Magical disembodied heads in European fairy tales usually rise out of wells or springs rather than flying (or rolling?) through woods, and they usually ask for the heroine to comb their hair or wash them. (Do what they request, and do it nicely!) The one in this fairy tale may (possibly) be some incarnation of the Leshy, the spirit of the woods - or it may not: Russian fairy tale experts out there, please let me know! Interestingly though, forest-dwelling flying heads are to be found in North-East Coast Native American folklore. These whirl through the trees and may emit shrieks so terrible as to bring death to the hearer. The Passamaquoddy tell of a creature named K’Cheebellok, a head without a body, but with ‘heart, wings and long legs’ (Fewkes, ‘Contribution to Passamaquoddy Folk-Lore’, Journal of American Folklore 1890, 271); and in their collection of Native American stories for children, ‘When the Chenoo Howls’ (Walker, 1998), Joseph and James Bruchac tell a story based on Senecan and Iroquois legends, of Dagwaynonyent, a malevolent and voracious Flying Head. (Being polite to this one wouldn’t have worked.)

What’s also interesting that even the ‘kind’ heroine of this story appears to feel uneasy about the Head. Why else would she rely upon the clarion call of cock-crow to banish it – usually the cue for ghosts and evil spirits to depart?

There was once an old woodcutter who had two daughters, one by his first wife  and one by his second. The second wife became jealous of her stepdaughter. She treated her badly and never stopped nagging her husband, telling him they were too poor to raise two girls. ‘You had better take her into the forest and leave her,’ she said. ‘She is no good to us!’

At last, ground down by her complaints, the woodcutter agreed. He took the girl away into the forest with him, and left her in a kind of hut, telling her to prepare some soup for their dinner while he was cutting wood.

At that time, there happened to be a gale blowing. The old man tied a log to a tree in such a way that when the wind blew, the log struck the tree and made a knocking sound. This made the girl think the old man was cutting wood nearby, but in reality he had gone away.

When the soup was ready, she called to her father to come to dinner. No reply came from him, so she called again and again.

And when the Head arrived, it cried, ‘Maiden, open the door!’

She opened the door.

‘Maiden, Maiden! Lift me over the threshold!’

She lifted it over.

‘Maiden, Maiden! Put the dinner on the table!’

She did so, and she and the Head sat down to dinner. When they had dined, ‘Maiden, Maiden!’ said the Head, ‘take me off the bench!’

She took it off the bench and cleared the table. It lay down to sleep on the bare floor; she lay down on the bench. As soon as she was fast asleep, the Head went into the forest and called its servants. When the maiden woke, the hut had become a house. Servants, horses and everything one could think of suddenly appeared.

The servants came to the maiden and said, ‘Get up! It’s time to go for a drive!’ So she got into a carriage along with the Head, but she took a cock along with her. As they drove along, she told the cock to crow, and it crowed. Again she told it to crow; it crowed again. And a third time she told it to crow. When it had crowed for the third time, the Head fell to pieces and became a heap of golden coins.

The girl told the servants to drive her back to her home. When her father and stepmother saw the gold treasure she had brought back with her, they were amazed, and the stepmother wanted her own daughter to have the same good fortune.  ‘Take the girl into the woods with you,’ she told her husband, ‘and leave her in the hut!’ And the woodcutter did so.

Deep in the forest, the human head heard her.

And when it arrived, it cried, ‘Maiden, open the door!’

So the girl opened the door. When she saw the Head, she was so frightened she hid behind the door and tried to push it shut. But the Head was in the way, and it said, ‘Maiden, Maiden! lift me over the threshold!’

‘No, I won’t touch a horrible Head like you!’

So the Head rolled itself into the hut.

‘Maiden, Maiden! put the dinner on the table!’

‘No, I won’t eat with a horrible Head like you!’

So the Head had to dish up its own dinner. The bowl and spoon flew on to the table, and the spoon worked hard and flew back and forth from the bowl, serving the Head until all the soup was gone.

‘Maiden, Maiden,’ said the Head. ‘Take me off the bench!’

But still the girl wouldn’t touch the Head, so it sprang down by itself and lay on the bare floor to sleep.

And the girl was too frightened to creep past it, so she lay down on the bench and was so weary that she fell asleep.

And when she was fast asleep, it ate her.

I can find no illustrations of this Russian fairy tale, but I have found some great depictions of flying heads from other cultures. This Japanese yokai, from the Bakemono zukushi scroll (Edo period, 18th/19th century) is a cloud dwelling monster with a mouth large enough to swallow the world! 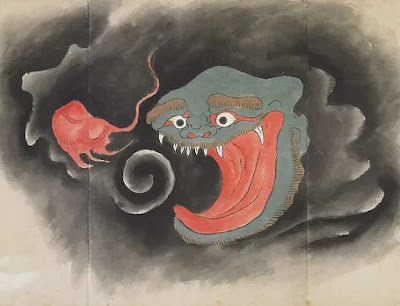 Posted by Katherine Langrish at 03:55