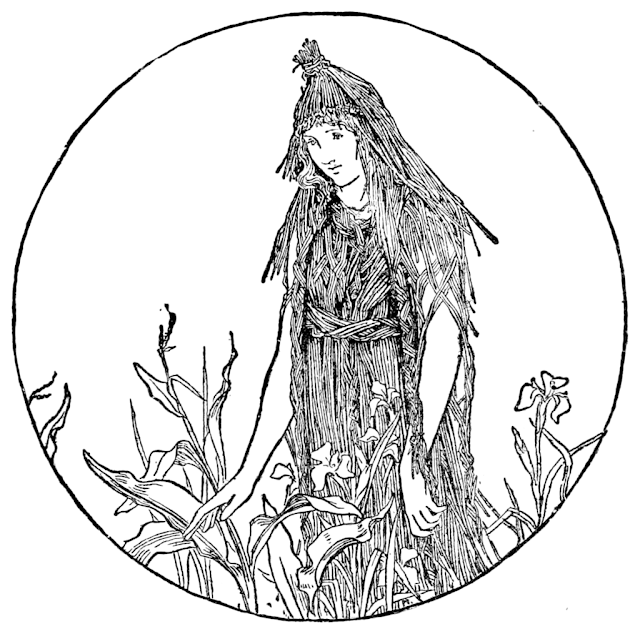 This English fairy tale will remind you in equal parts of Cinderella and King Lear. A rich father orders his daughters to tell him how much they love him. (Never a wise thing to do.) When his youngest daughter gives him an answer he finds unacceptable, he banishes her from his house. Now destitute and homeless, she walks away into a fen, weaves herself a cloak and cap of rushes to hide her grand clothing and finds unpaid work as a scullery maid in another great house. Since she refuses to tell them her own name, they call her Cap o’ Rushes.

After this, the story conforms for a while pretty much to the Cinderella type, although apart from being unpaid she’s not badly treated: the other kitchen maids behave to her in quite a friendly manner. Evening after evening they try unsuccessfully to get her to come along with them to watch the grand people dancing. Cap o’ Rushes has her own fish to fry, though, and her eventual marriage is less an end in itself than an opportunity to teach her arrogant father a lesson. In this she succeeds, and the story ends touchingly in forgiveness and reconciliation.

The tale seems to have first appeared in the Suffolk Notes and Queries of The Ipswich Journal. It was contributed by one A.W.T. along with the note: ‘Told by an old Servant to the Writer when a Child’. I have not found a date for this, but it was republished in Longman’s Magazine, Feb. 1889 and in Folk-Lore, Vol I, no III, September 1890.

Well, there was once a very rich gentleman and he’d three daughters, and he thought to see how fond they was of him. So he says to the first, ‘How much d’you love me, my dear?’

‘Why, I love you as fresh meat loves salt,’ says she.

Well, he were that angry. ‘You don’t love me at all,’ says he, ‘and in my house you stay no longer.’ So he drove her out there and then and shut the door on her. 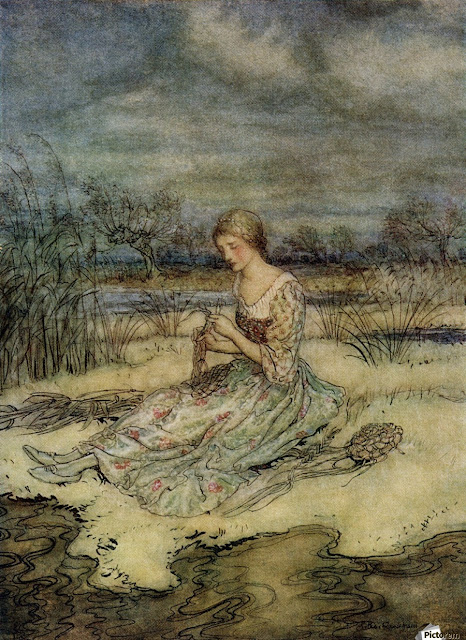 ‘Well,’ says they, ‘if you like to wash the pots and scrape the saucepans, you may stay.’

So she stayed there and washed the pots and scraped the saucepans and did all the dirty work, and because she gave no name they called her ‘Cap o’ Rushes’.

Now one day there was to be a great dance a little way off, and the servants was let to go and look at the grand people. Cap o Rushes said she was too tired to go, so she stayed home. But when they was gone she offed with her cap o’ rushes and cleaned herself, and went to the dance. No one there was so finely dressed as she.

Well who should be there but her master’s son, and what should he do but fall in love with her the minute he set eyes on her? He wouldn’t dance with anyone else. But before the dance was done, Cap o’ Rushes she slipped off and away she went home. And when the other maids was back she was framin’ to be asleep with her cap o’ rushes on.

Next morning they says to her, ‘You did miss a sight, Cap o’ Rushes!’

‘What sight was that?’ says she.

‘Why, the beautifullest lady you ever see dressed right gay and gallant. The young master, he never took his eyes off her.’

‘I should ha’ liked to have seen that!’ says Cap o’ Rushes.

‘Well there’s to be another dance this evening, and perhaps she’ll be there.’

But come the evening, Cap o’ Rushes said she was too tired to go with them. Howsumdever, when they was gone she offed with her cap o’ rushes and cleaned herself, and away she went to the dance.

The master’s son had been reckoning on seeing her, and he danced with no one else and never took his eyes off her. But before the dance was over she slipped off and home she went, and when the maids came back she framed to be asleep with her cap o’ rushes on.

Next day they says to her again, ‘Well, Cap o’ Rushes, you should ha’ been there to see the lady. There she was again, gay and gallant, and the young master he never took his eyes off her.’
‘Well, there,’ says she, ‘I should ha’ liked to ha’ seen her!’

‘Well,’ says they, ‘there’s a dance again this evening, and you must go with us, for she’s sure to be there.’

But come this evening, Cap o’ Rushes said she was too tired to go, and do what they would she stayed at home. But when they was gone she offed with her cap o’ rushes and cleaned herself, and away she went to the dance.

The master’s son was rarely glad when he saw her. He danced with none but her and never took his eyes off her. When she wouldn’t tell him her name or where she came from, he gave her a ring and told her that if he didn’t see her again, he should die. But afore the dance was over she slipped off and home she went, and when the maids came home she was framing to be asleep with her cap o’ rushes on.

So the next day they says to her, ‘There, Cap o’ Rushes, you didn’t come last night, and now you won’t see the lady, for there’s no more dances.’

‘Well, I should ha’ rarely liked to ha’ seen her,’ says she.

The master’s son he tried every way to find out where the lady was gone, but ask where he might and go where he might, he never heard nothing about her. And he got worse and worse for the love of her, till he had to keep to his bed.

‘Make some gruel for the young master,’ they says to the cook, ‘he’s dying for love of the lady.’ The cook, she set about making it, when Cap o’ Rushes came in.

‘I’m going to make some gruel for the young master,’ says the cook, ‘for he’s dying for love of the lady.’

Well the cook wouldn’t let her at first, but at last she said yes, and Cap o’ Rushes made the gruel. And when she had made it she slipped the ring into it on the sly before the cook took it upstairs. The young man, he drank it, and he saw the ring at the bottom.

‘Who made this gruel?’ says he.

‘I did,’ says the cook, for she were frightened. And he looked at her.

‘Where did you get this ring?’ says he.

‘Who are you, then?’ says the young man.

‘I’ll show you,’ says she, and she offed with her cap o’ rushes and there she was in her beautiful clothes.

Well, the master’s son got well very soon, and they was to be married in a little time. It was to be a very grand wedding, and everyone was asked, far and near. And Cap o’ Rushes’ father was asked. But she never told nobody who she was.

But before the wedding she went to the cook, and says she:

‘I want you to dress every dish without a mite of salt.’

‘That don’t signify,’ says she.

Well, the wedding day came, and they was married. And after they was married, all the company sat down to their vittles. When they began to eat the meat, that was so tasteless they couldn’t eat it. But Cap o’ Rushes’ father he tried first  one dish and then another, and then he burst out crying.

‘What is the matter?’ said the master’s son to him.

‘Oh!’ says he, ‘I had a daughter. And I asked her how much she loved me. And she said, “As much as fresh meat loves salt.” And I turned her from my door, for I thought she didn’t love me. And now I see she loved me best of all. And she may be dead for aught I know.’

‘No, father, here she is!’ said Cap o’ Rushes. And she goes up to him and puts her arms around him.

And so they was happy ever after.

Posted by Katherine Langrish at 07:04