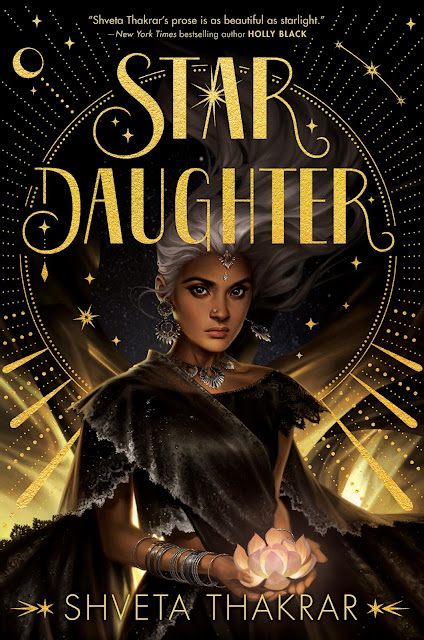 Pausing for a week my series on strong fairy tale heroines, I am delighted to welcome Shveta Thakrar to the blog. Her own words will introduce her better than I can, but having read and loved some of her short stories, I'm very much looking forward to her debut novel 'Star Daughter', which will be published in the USA on August 11th. (If like me you live in the UK, we have to wait until September 3rd.) Shveta weaves wonderful fairy tales and legends into her work, and as Holly Black has said of her writing, it’s “as beautiful as starlight”. I can't wait to meet her new heroine, Sheetal - who is bound to be another strong, inspiring and magical young woman.


When, in my mid-twenties, I committed to becoming a professional author, I decided to focus solely on desi characters and their adventures. I would write first and foremost for the girl I had been, I promised myself, the lonely, confused, self-doubting girl who’d needed the Hindu and Indian heritage she’d grown up with to be given equal footing with all the modern Western stories she and everyone around her were steeped in. That desire has never wavered; in fact, it’s only gotten stronger as I move forward in my career.

I have a whole catalog of published short stories and poems making good on this pledge, and now, as my debut young adult fantasy novel, Star Daughter, makes its way into the world, I’m thinking about the various flavors of mythology that appear in its pages. I’ve said elsewhere that it was pitched as Neil Gaiman’s and Charles Vess’s Stardust, an illustrated novel, meets Tanuja Desai Hidier’s Born Confused, a contemporary young adult novel, but the intersection of those two was really just the starting point.

Over the course of many drafts and almost as many years, I layered in references to stories from ancient texts such as the Mahabharata and the Bhagavad Purana, like the love story of Nala and Damayanti and the tale of Gajendra and the crocodile. I mentioned legendary characters from Hindu lore, like Urvashi the apsara and her erstwhile lover, mortal King Pururavas. Inspired by this vibrant source material, I even invented mythology of my own, like Sheetal’s mother’s tale of the origin of diamonds.

In my eyes, to craft fantasy narratives that draw on the mythology—or sacred stories—of my faith is to write a love letter to it. Fan fiction about and for the gods. You could argue that mythology itself is fan fiction in a sense, the first works celebrating notions and beings greater than we can otherwise conceptualize, always tweaking details as necessary (just look at how mythological “givens” shift from region to region and from era to era). Oral storytellers have always done this, embellishing and reworking their source material to meet their audience’s expectations and the messages they themselves wish to convey.

From that angle, when I weave these old stories into Star Daughter, I’m merely adding my voice to a long and complex lineage, the great chorus that has been singing since the beginning of human history. (An apt metaphor, as starsong flows from the beginning of the novel to the end.) No mythology is without dubious and sometimes even problematic aspects and contradictions, of course, but you can say the same thing about human progress; the stories we choose to tell and the way we tell them are a reflection of us. As we change, so do our stories and the lens through which we view them.

Mythology is not only mutable but timeless, too. No, you’re probably not going to wake up and find yourself an impossibly beautiful, mischievous, seductive apsara from the heavens—though with reincarnation, anything’s possible, right?—but who among us can’t understand pining after someone or something we can’t have? Pururavas and Urvashi undergo great trials for their love—including Urvashi being turned into a vine!—and while not all people seek out romantic relationships, I think it’s safe to say everyone yearns to love and be loved, whatever shape that takes.

Another fabled couple, Nala and Damayanti, is named in the novel as one of Sheetal’s favorites. The two of them, though husband and wife, are separated for years by jealous would-be suitors and forced to endure terrible hardships, but through their steadfast devotion, they eventually overcome all obstacles and find their way back to each other. It’s a story about never giving up, about having faith and acting from a pure heart despite the treachery and selfishness of others. Ultimately, we can only be responsible for our own actions—but we must be.

Speaking of faith, the story of Gajendra the elephant has always stuck with me. One morning when he makes his daily pilgrimage to the lake where he picks lotuses as an offering for Lord Vishnu, a wily crocodile surfaces in the water and closes his powerful jaws on poor Gajendra’s leg. The two of them, predator and prey, are trapped in that stalemate for a thousand years, during which time Gajendra’s entire herd gives up and leaves him for dead. Finally, with his last breath, Gajendra calls upon Lord Vishnu for help while holding up the lotus he never released, and Lord Vishnu kills the crocodile, freeing Gajendra. If that’s not a lesson in having faith and trusting that help will arrive when one truly needs it, then I don’t know what is.


Now that I’m thinking about it, each of these themes comes through in Star Daughter. That’s no surprise, really; the stories from my heritage are like a warm, fuzzy blanket I’ve taken comfort in since my childhood. They resonate in my bones and connect me to my ancestors, even if I never knew most of them, a garland of lotus blossoms leading from the distant past to now. I couldn’t imagine writing a fantasy and not incorporating them in some manner.

And best of all, they’re fun. They’re fun to dust off and delight in and grumble at and reexamine and retell. To play with and use to create something new. After all, the power of a story rests squarely in the act of its being told, and so remembered. By giving these stories to Sheetal, I hope readers of my background will feel seen. For readers from different backgrounds, I invite them to explore these and other tales from the rich treasure trove of Hindu mythology.

From Sheetal and me, a blessing: may you, dear reader, burn bold in the deepest night.

Shveta Thakrar is a part-time nagini and full-time believer in magic. Her work has appeared in a number of magazines and anthologies including Enchanted Living, Uncanny Magazine, A Thousand Beginnings and Endings, and Toil & Trouble. Her debut young adult fantasy novel, Star Daughter, is out now from HarperTeen. When not spinning stories about spider silk and shadows, magic and marauders, and courageous girls illuminated by dancing rainbow flames, Shveta crafts, devours books, daydreams, travels, bakes, and occasionally even plays her harp.

Posted by Katherine Langrish at 00:52