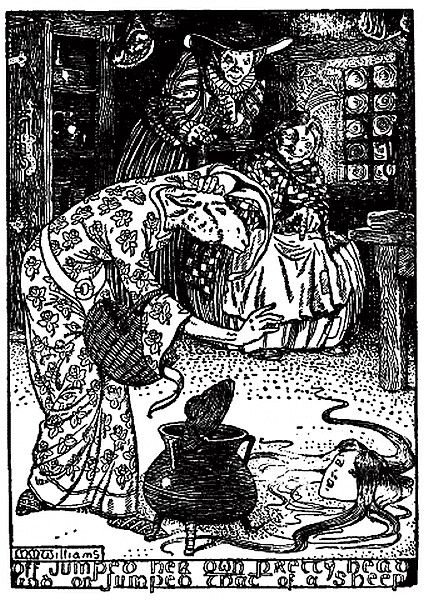 Kate Crackernuts is the same story type as the Norwegian Tatterhood (#15 in this series) in which two sisters or stepsisters stick together through thick and thin, and the plain or ugly sister rescues the pretty one from a witch’s spell and manages things so that in the end they both marry princes (whether the prince wants to or not). Kate Crackernuts in this tale rescues her prince as well.

The story was first collected by Duncan J Robertson (1860-1941) – poet, naturalist, County Clerk of Orkney for over 50 years and some time owner of Eynhallow, a small and now deserted island in Eynhallow Sound between Rousay and Mainland Orkney. (The island is said to have been first inhabited by the Finfolk or mer-people, who were driven out bythe first human settler, the Goodman of Thorodale.)

Anyway, Robertson published Kate Crackernuts in Longmans Magazine, vol xiii (1888/9). I wasn't able to consult this version, since the only online edition is unavailable to anyone outside the United States. But Andrew Lang republished the story in Folklore, Sept. 1890 (vol 1, no. iii) and it’s probably safe to assume he made few if any changes, since the narrative is quite fragmented. It keeps dropping in and out of a Scots, not Orcadian dialect – which suggests to me that it may not in fact have been collected on Orkney – and various chunks of the story are told in a rather stilted summary. For example: ‘In consequence, the answer at the henwife’s house was the same as on the preceding day’, or ‘A magnificent hall is entered, brightly lighted up, and many beautiful ladies surround the prince,’ etc. To make it flow and be enjoyable to read or listen to, it absolutely has to be expanded and partly rewritten. This I have done – and Joseph Jacobs did so too when he included it in his famous (somewhat misnamed) English Fairy Tales of 1890. He complained that the tale was ‘very corrupt, both of the girls being called Kate’, and renamed one of them Anne, doubtless to prevent child readers getting muddled. I don’t personally think this was necessary, and I believe the two Kates are likely to be authentic and not a mistake at all. 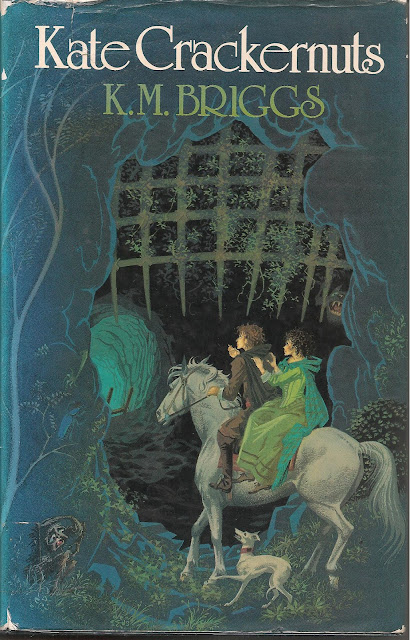 Katharine Briggs seems to have agreed, for she kept the two Kates in her lovely 1963 novel Kate Crackernuts in which she gives the fairy tale a local habitation and a date in 17th century Scotland at Auchenskeoch, Dumfries and Galloway, near the Solway Firth. And in her lightly rewritten version of the fairy tale in the 1976 Dictionary of Fairies, she calls the girls ‘the King’s Kate and the Queen’s Kate’, but follows Joseph Jacobs in making the all-night fairy dancing the cause of the prince’s illness. The Robertson/Lang version says nothing about this at all, but it makes good narrative sense.

Food is important in the story. Just a mouthful of bread or a handful of peas can protect the king’s Kate from her minnie’s (stepmother’s) wiles and the henwife’s spells. Bread was often blessed by having a cross cut into it, and perhaps the peas are given to her with a blessing, too? Then of course there are the nuts – probably hazel nuts – which Kate not only eats herself but uses as a medium of exchange for the fairy wand and bird. In Celtic legend the hazel is the tree of knowledge or divination, which may be why hazel rods are still used by water diviners. Hazel trees with crimson nuts were believed to grow around the pools at the source of Irish rivers. The nuts which fell into the water fed the Salmon of Knowledge, and anyone who ate the flesh of the salmon would in their turn become wise.

One sleepy afternoon two years ago I visited the deep, peaty pool at the source of the Shannon. The steep banks were sprinkled with flowers: gnats and mayflies rose and sank in the air, and although the trees leaning over it and dropping the occasional lazy leaf were willows, I could well imagine the Salmon of Knowledge swimming unseen in the brown water.

I wonder if Kate’s handful of hazel nuts brought her the wisdom and luck to succeed? 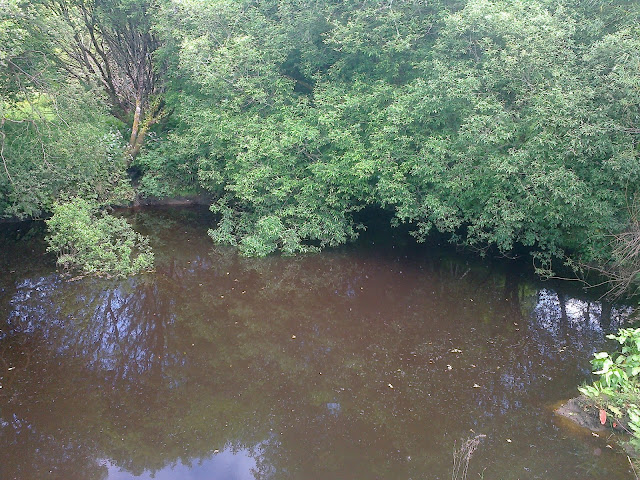 Once upon a time there was a king and a queen, as in many lands have been. The king had a daughter, Kate, and the queen had one too, but the king’s Kate was bonnier than the queen’s Kate, and the queen was jealous of her and cast about for a way to spoil her beauty. So she took counsel of the henwife, and the henwife told her to ‘send the lassie to me in the morn, fasting.’

So on the next morn, the queen sent the king’s Kate down to the henwife for eggs, but the lassie was hungry and snatched up a piece of bread before she went out. When she came to the henwife’s, she asked for the eggs as she’d been told to, and the henwife told her to ‘lift the lid of the pot there, and see.’ Well the lassie lifted the lid and up rose the steam, but nothing happened for all that. ‘Gae hame to your minnie, and tell her to keep her larder door better steekit,’ said the henwife. Then the queen knew that the lassie had had something to eat. Next morning she watched her, and sent her out fasting, but as the lassie went to the henwife’s she saw some country folk picking peas by the roadside, and spoke to them, and they gave her a handful of the peas which she ate by the way. So once again when she lifted the lid of the pot and the steam rose, no harm came to her, and the henwife said, ‘Tell your minnie the pot winna boil if there’s nae fire under it.’

On the third day, the queen takes the king’s Kate by the hand and herself leads her to the henwife. And now when the lassie lifts the lid of the pot and the steam rises, why, off jumps the princess’s ain bonnie head, and on jumps a sheep’s head!

Now the queen was quite satisfied and went home, but the queen’s ain daughter was angry. She took a fine linen cloth and wrapped it around her sister’s head, and took her by the hand and out they gaed to seek their fortune.

They gaed, and they gaed far, and further than I can tell, till they came to a king’s castle. Kate rapped on the door and asked for ‘a night’s lodging for my’sel and my sick sister.’

‘Aye, you shall have that,’ they said, ‘will ye but only sit up this night wi’ the king’s sick son and watch o’er him, and if a’s right wi’ him in the morning, ye shall have a peck o' siller as well.’

Aye, Kate was well willing to sit by him, and all went fine till midnight. Then the prince rose like one in a dream, and dressed himself, and with Kate stealing after him he went down to the stables, saddled his horse, called his hound and jumped into the saddle – and Kate jumped up behind. Away they rode through the greenwood and the hazel thickets, Kate picking nuts as they passed and filling her apron with them. They rode on and on till they came to a green hill. The prince drew rein and cried, ‘Open, open, green hill an’ let in the young prince with his horse and his hound,’ and Kate added, ‘and his lady him behind.’ 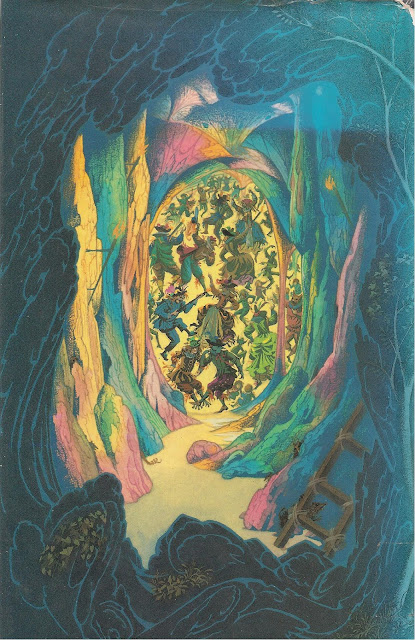 At once the green hill opened and in they passed to a great hall marvellously lit and full of dancers. Kate slipped off the horse and hid behind the door while a crowd of beautiful fairy women pulled the prince into the reel and made him dance and dance until he was faint with weariness, and at cock-crow he took his horse and rode home with Kate behind. Then he lay down in his bed and Kate sat by the fire and cracked her nuts and ate them. When the folk came in the morning, Kate told them the prince had slept well, so they said if she would  another night with him, they would give her a peck of gold.

On the second night the prince rose as before and took his horse, and Kate rode with him to the fairy hill. Sitting behind the door as the prince danced, she saw a fairy bairn playing with a silver wand, and she overheard one of the dancers say, ‘Three straikes o’ that wand would make Kate’s sick sister as bonnie as ever she was.’ So Kate rolled nuts to the fairy boy, and she kept rolling them till the bairn dropped the wand to run after them, and Kate snatched it up and hid in in her gown and carried it with her when she rode back to the castle behind the prince. Then she tapped her sister three times with the wand, and off flew the sheep’s head and there she stood with her ain head on, bonnier than ever before, and when the brother to the sick prince saw her, he couldna take his eyes off her. And Kate sat down by the fire and cracked nuts and ate them.

So they asked Kate to sit with the prince for a third night, and she said she would only do it if she could marry him. And when he rose at midnight she followed him a third time into the fairy hill, and this time she saw the bairnie playing with a little dead bird, and heard one of the dancers saying, ‘Three bites of that birdie would make the sick prince as well as ever he was.’ Then Kate rolled nuts to the bairnie, and rolled and rolled them till he set down the birdie and ran after the nuts and Kate picked up the birdie and put it in her apron.

Lived happy and they died happy,


And never drank out of a dry cappy. 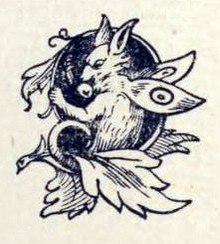 'Off jumped her own pretty head': illustration by Morris Meredith Williams from The Scottish Fairy Book, 1910

'Kate Crackernuts': back cover illustration by Pauline Baynes
Posted by Katherine Langrish at 01:48