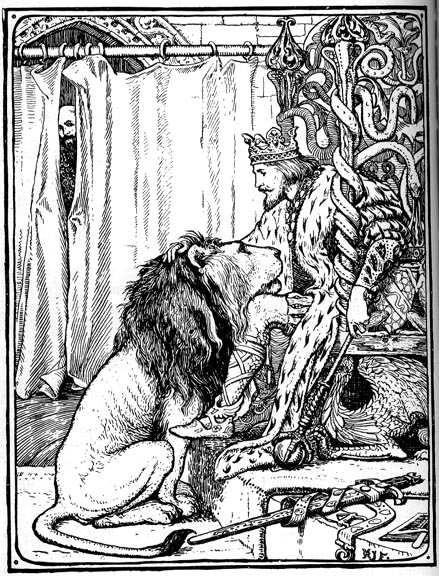 If we approach fairy tales expecting nothing but sexist stereotypes, we will miss the irony, the inflections; we won’t get the jokes. In this tale of the Brothers Grimm, a princess dresses herself and eleven ladies-in-waiting as huntsmen and goes to work for her lover, a king who has promised his dying father to marry a different woman.

This king has a talking lion. (As you do.) The lion suspects the twelve young huntsmen of being women. He sets traps to get them to betray themselves – such as an array of twelve spinning wheels which he assures the king these ‘women’ will be unable to resist. You have to imagine this story being told aloud in mixed company, at a time when spinning was a woman’s repetitive, endless work. It’s as if, in a modern version, the lion had set out a line of twelve vacuum cleaners! Readers who take it at face value are missing the comedy of the princess’s satirical aside to her followers as they stride past: ‘Hold back, girls, don’t give those spinning wheels a glance…’

It is all too easy to misinterpret a tale when it’s pinned to the page like a dead butterfly – still more so when the original transcript is over two centuries old and even the English translation was made over 130 years ago. The classic translation of the Grimms’ tales into English is the one by Margaret Hunt (published 1884), whose clear, unadorned style now unavoidably feels somewhat stiff. I’ve stuck quite closely to her version for this post, I didn’t want to change it much; but I have loosened it up a little. It’s best to regard ‘the story on the page’ in much the same way as we regard sheet-music: it requires performance – the voice of the story-teller – to bring it to multi-dimensional life. But the information on the page still has to be examined and respected. Like some others in the Grimms’ collection, The Twelve Huntsmen directs sly, subversive humour at male assumptions about female ability, and if we fail to notice when  a story is inviting us to laugh, it’s we who are naïve.

Once upon a time, a king’s son was betrothed to a woman he loved very much. One day when they were sitting together, and very happy, news came that the prince’s father lay on his deathbed and wanted to see his son once more before the end. So the prince said to his beloved, ‘Though I have to leave you, I give you this ring to remember me by, and when I am king I will return for you.’

Away he rode, but when he came to his father’s bedside the old man was desperately ill and near death. ‘My dear son,’ said he, ‘now that I see you, promise me that you will marry as I advise,’ and he named another king’s daughter to be his bride. The son was too distraught to think what he was doing and said, ‘Yes dear father, yes, whatever you wish shall be done.’ On hearing these words the old king closed his eyes and died.

So after the son had been proclaimed king and the period of mourning was over, he felt compelled to keep the promise he had made to his father, and he sent for permission to court the other king’s daughter’s, and permission was granted. When his lover heard of this she was so unhappy she nearly died. Her father said to her, ‘Dear child, what makes you so sad? Tell me what you want; anything in my power to grant shall be yours.’ The young woman thought for a moment and said, ‘My dear father, I wish for eleven girls just like myself in face, figure and height.’ So her father searched throughout his kingdom until eleven young women were found who were just like his daughter in face, figure and height.

When they were assembled, the king’s daughter had twelve suits of huntsmen’s clothes made, all alike, and she and the eleven girls put them on and rode away together to the court of her former lover, where she asked if he would take twelve fine huntsmen into his service. The king did not recognise her, but the huntsmen were all such handsome fellows he said, yes, willingly he would hire them! And so they became the king’s royal huntsmen.

Now the king had a lion, and this lion knew everything. Nothing could be kept from him, and one evening he said to the king, ‘You think you have twelve huntsmen?’

‘Of course I have twelve huntsmen!’

‘You are wrong,’ said the lion, ‘they are twelve girls.’

The king couldn’t believe this, so the lion told him to throw handfuls of dried peas over the floor of the antechamber: ‘And then you’ll see! Men tread firmly, so the peas won’t move when they step on them, but girls trip and skip and slide their feet, and the peas will roll in all directions.’ The king liked this idea, so he ordered the peas to be thrown on the floor.

But one of the king’s servants who was friendly with the huntsmen had overheard what the lion said, so he ran to them with the news. ‘The lion wants to make the king think you are girls!’  The king’s daughter thanked him. When he had gone she said to her  women, ‘Time to show your strength, girls! Make sure you tread firmly on those peas!’ And next morning when the king called the twelve huntsmen before him, they walked into the antechamber with such a strong, sure tread that not a single pea rolled or even shifted.

After they had left, the king turned on the lion: ‘What you told me was false! They walk just like men.’ The lion replied, ‘They were pretending. Someone must have warned them! But here’s an idea: bring twelve spinning wheels into the antechamber. Then you’ll see! They’ll be so thrilled they won’t be able to resist going over and examining them. No man would do that!’ This advice pleased the king, and he had the spinning wheels placed in the antechamber.

But the servant who was friendly to the huntsmen told them about this plan too. ‘Hang on to yourselves, girls!’ said the king’s daughter to her eleven women. ‘Don’t give those spinning wheels a glance!’ So when the king summoned them, the twelve huntsmen strode through the antechamber without so much as turning their heads to look at the spinning wheels. And the king said to the lion, ‘You’ve been proved false again. They’re men! They showed no interest in the spinning wheels.’

‘They knew we were trying to trick them,’ said the lion, ‘that’s why they restrained themselves.’ But the king no longer trusted the lion’s opinions. The twelve huntsmen became his companions whenever he went out hunting, and he valued them more and more.

One day as they were out riding in the forest, news came that the king’s new bride-to-be was approaching with her retinue. When his true lover heard this, her heart hurt so much she fell fainting to the ground. Seeing the accident that had befallen his dear huntsman, the king ran to help him, grasped his hand and drew off the glove that covered it. Then he saw the ring he had given his first beloved, and looking again in her face, he recognised her. His heart was so touched that he kissed her, and said as she opened her eyes, ‘You are mine and I am yours, and no one in the world can change that.’ He sent a messenger to the other bride, begging her to return to her own kingdom, for he had a wife already and someone who has found an old key doesn’t need a new one. So their wedding was celebrated, and the lion was vindicated and taken back into favour – for after all, he had got one thing right.

Posted by Katherine Langrish at 02:24