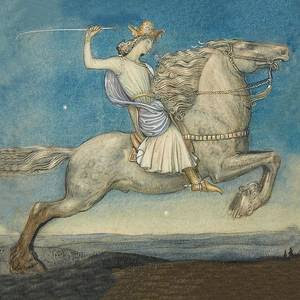 This Russian tale from the collection of Aleksander Afanas’iev, translated by Norbert Guterman, brings my series of traditional fairy tales with strong heroines to a close. There are many Vasilisas in Russian fairy tales, and most of them are strong. In the well-known story of Vasilisa the Beautiful, for example, a young woman is sent to borrow fire from the witch Baba Yaga, while Vasilisa the Wise (#17 in this series) is a magic-worker who rescues the prince from her father the Sea King.

Vasilisa the Priest's Daughter works no magic of any kind. She simply uses wits and nerve to out-smart and rebuke an impertinently curious king. Her preferred way of life – dressing and behaving as a young man – is accepted by her father and raises no eyebrows among her neighbours, and she easily evades the efforts of the king – and the witch who advises him – to discover her real gender. I particularly like the trumphant note she sends him, at the end, where she compares him to a raven and herself to a falcon. That's telling him!

Those of you who've been following the series will remember similar attempts by the king and his pet lion in Grimms’ The Twelve Huntsmen #27 – and by a genie and his mother in the Romanian tale The Princess in Armour #3. (Don't you love the infinite variations on themes in fairy tales?) Naturally all such ingeniously contrived tricks are doomed to fail, and why? Because they rely upon crude and inadequate stereotypes of the character and capacities of women. This is a deliberate narrative choice:  we are absolutely expected to enjoy seeing the heroines of these stories run rings around their often ridiculous male adversaries.

Still, the women of fairy tales have no real need to impersonate men, any more than the male heroes of fairy tales often resemble warriors with swords. Far more frequently, fairy tales celebrate humble protagonists, underdogs who succeed beyond their wildest dreams through chutzpah, kindness, endurance and luck. Girls and women in fairy tales are no less energetic, witty, clever, brave and persistent than the brothers and lovers they often rescue. In fact, they are often more so!
My next post will examine one more story in close detail, before I move on to a different subject.
Witches!

In a certain land, in a certain kingdom, there was a priest called Vasily who had a daughter named Vasilisa Vasilyevna. She wore man’s clothes, rode horseback, was a good shot with a rifle and did everything in a quite unmaidenly way, so that only a very few people knew that she was a girl: most people thought she was a man and called her Vasily Vasilyevich, all the more so because she was very fond of vodka. This is, as is well known, entirely unbecoming to a maiden…

One day, King Barkhat – for the was the name of the king of the country – went hunting game and he met Vasilisa Vasilyevna. She was riding horseback in men’s clothes and was also hunting. When he saw her, King Barkhat asked his servants, ‘Who is that young man?’ One servant answered him, ‘Your majesty, that isn’t a man but a girl; I know for sure that she is Vasilisa Vasilyevna, the daughter of the priest Vasily.’

As soon as the king returned home he wrote a letter to the priest Vasily asking him to permit his son Vasily Vasilyevich to visit him and eat at the king’s table. Meanwhile, he himself went to the little old backyard witch and began questioning her as to how he could find out whether Vasily Vasilyevich was really a girl.

As soon as the king’s letter reached Father Vasily and he showed it to his daughter, she went to the stable, saddled a grey horse with a grey mane, and went straight to King Barkhat’s palace. The king received her; she politely said her prayers, made the sign of the cross as is prescribed, bowed low to all four sides, graciously greeted King Barkhat, and entered the palace with him. They sat together and began to drink heady drinks and eat rich viands. After dinner, Vasilisa Vasilyevna walked with King Barkhat through the palace chambers; as soon as she saw the embroidery frame she began to reproach the king: ‘What kind of junk do you have here, King Barkhat? In my father’s house there is no trace of such womanish fiddle-faddle, but in King Barkhat’s house, womanish fiddle-faddle hangs in the chambers!’ Then she politely said farewell and rode home, and the king was none the wiser as to whether she was really a girl.

And so two days later – no more! – King Barkhat sent another letter to the priest Vasily, asking him to send his son Vasily Vasilyevich to the palace. As soon as Vasilisa Vasilyevna heard about this she went to the stable, saddled a grey horse with a grey mane, and rode straight to King Barkhat’s palace. She graciously greeted him, politely said her prayers to God, made the sign of the cross as is prescribed and bowed low to all four sides. King Barkhat had been advised by the little old backyard witch to order kasha cooked for supper, and to have it stuffed with pearls. The little old witch had told him that if the youth was really Vasilisa Vasilyevna, he would put the pearls in a pile, and if he was Vasily Vasilyevich, he would throw them under the table.

Supper time came. The king sat at table and placed Vasilisa Vasilyevna on his right hand, and they began to drink heady drinks and eat rich viands. Kasha was served after all the other dishes, and as soon as Vasilisa Vasilyevna took a spoonful of it and discovered a pearl, she flung it under the table together with the kasha and began to reproach King Barkhat. ‘What kind of trash do they put in your kasha?’ she said. ‘In my father’s house there is no trace of such womanish fiddle-faddle, yet in King Barkhat’s house, womanish fiddle-faddle is put in the food!’ Then she politely said farewell to King Barkhat and rode home. Again the king had not found out whether she was really a girl, though he badly wanted to know.

Two days later, upon the advice of the little old witch, King Barkhat ordered that his bath be heated; she had told him that if the youth really was Vasilisa Vasilyevna he would refuse to go to the bath with him. So the bath was heated.

Again King Barkhat wrote a letter to the priest Vasily, telling him to send his son Vasily Vasilyevich to the palace for a visit. As soon as Vasilisa Vasilyevna heard about it, she went to the stabel, saddled her grey horse with the grey mane, and galloped straight to King Barkhat’s palace. The king went out to receive her on the front porch. She greeted him civilly and entered the palace on a velvet rug; having come in, she politely said her prayers to God, made the sign of the corss as is prescribed, and bowed very low to all four sides. Then she sat at table with King Barkhat and began to drink heady drinks and eat rich viands.

After dinner the king said, ‘Would it not please you, Vasily Vasilyevich, to come with me to the bath?’

‘Certainly, your Majesty,’ Vasilisa Vasilyevna answered. ‘I have not had a bath for a long time and should like very much to steam myself.’ So they went together to the bathhouse. While King Barkhat undressed in the anteroom, she took her bath and left. So the king did not catch her in the bath either. Having left the bathhouse, Vasilisa Vasilyevna wrote a note to the king and ordered the servants to hand it to him when he came out. And this note ran:

Picture credits:
As there seem to be no illustrations of this fairy tale, I have chosen to use  'A prince arrived'  by John Bauer.
Posted by Katherine Langrish at 02:15