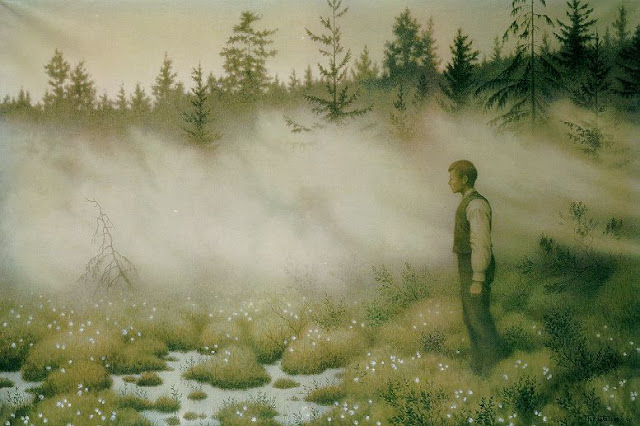 This Icelandic tale was collected by Jón Árnason (1819 – 1888) whose six volumes of folk tales and fairy stories were edited and published in Reykjavik between 1954-61. The translation is from Icelandic Folk and Fairy Tales, selected and translated by May and Hallberg Hallmundsen, Iceland Review Library, 1987. In their introduction they comment that ‘every child in Iceland’ recognises ‘Jón Árnason’s Folktales’ – and no wonder, for they are robust and remarkable.

‘They are written,’ say the translators, ‘in the everyday spoken Icelandic of the time when they were recorded, many of them taken down word for word as told by the storytellers – farmers, laborers, housewives, maids. … The best way to render such narratives into English, we concluded, would be in plain unadorned prose that was faithful to the meaning if not to every word of the story. So, wherever the original text is bumpy or awkward – and it is in many places – we tried to smooth it over and we did not hesitate to reshape of switch sentences around if we thought it was inducive to a clearer understanding or a more straightforward narrative.’  I have taken the occasional similar liberty with their translation: for example, sometimes changing reported speech into dialogue.

This story needs almost no introduction: it speaks for itself – but I will say that Signý’s rescue of a prince from an enchanted sleep is an interesting role reversal of the Sleeping Beauty!

Once upon a time there was a king and a queen in their kingdom. His name was Hringur, but the queen’s name is not known. They had one son called Hlini. He was a promising lad who grew up to be a great champion, and the story has it that there was a crofter and his wife living near the palace grounds. They had a daughter named Signý.

One day the prince was out hunting with some of his men, and when they had felled a few animals and several birds and were preparing to go home, a fog descended upon them, so dense that the men lost sight of their prince. After searching in vain for a very long time they went back to the palace and told the king they had lost Hlini and couldn’t find him anywhere. This sad news greatly affected the king, and the next day he sent out a large party of men to look for his son. They searched until evening without finding him, and this went on for three days; Hlini was nowhere to be found. Sick with grief, the king took to his bed and let it be known throughout his land that whoever could find his son would be rewarded with half his kingdom.

When Signý heard of this, she told her parents about it, asked them for food and new shoes – which they gave her – and immediately set off. She walked for the better part of a day, and towards evening she came upon a cave. Entering it, she saw two beds, one embroidered with silver and the other with gold. When she drew closer, there was the prince lying asleep in the gold-embroidered one, and she tried to wake him but she couldn’t. Then she took a better look around her and saw that there were runes scored into the wooden heads of the beds, spelling out words she didn’t understand. So she went and hid herself in the nook behind the cave door. 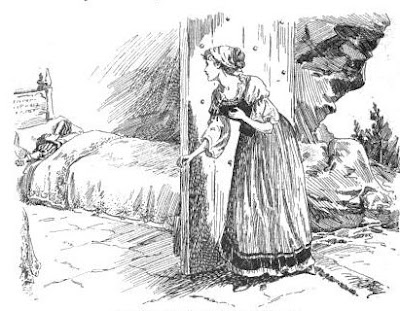 No sooner was she hidden than she heard a great rumble and saw two very large-featured jötunns, or giantesses, coming. As they stepped into their cave, one of them said, ‘Fy, fo, there’s a smell of humans in here.’

‘It’s only Prince Hlini,’ said the other.

They went up to the bed where the prince was sleeping and said,

They sang and he fell asleep. The two giantesses then took their clothes off and went to sleep in the silver-embroidered bed.

When they rose the following morning, they roused Hlini and offered him food, which he rejected. Then the younger one asked again if he would marry her. He said no, and with that they put him to sleep the same way as before, and left.

When she was sure they had gone, Signý crawled out ofher nook and said:

The prince woke up. He greeted her with joy and asked for the news and what was happening. She told him everything she knew and then asked what had happened to him. ‘After I was parted from my men in the mist,’ he said, ‘two giant women found me and brought me here, and one of them is trying to make me marry her.’

Signý said, ‘You should agree to marry her on condition that she tells you what the carved runes on the beds mean, and what the two of them get up to all day.’

The prince said he would do as she advised. Then he took a chessboard that was there, and asked Signý to play with him. They played until evening, but when dusk began to fall she told him to get back on the bed. Then she said:

The prince fell asleep, and Signý hid herself back in her nook. Very soon afterwards, she heard the giantesses coming. They slouched into the cave, monstrous-looking as they were, and while the eldest one cooked a meal, the youngest went over to the bed, woke Hlini and asked if he would eat. This time he accepted. When he had finished his meal, the giantess asked if he would marry her. He replied that he would, provided that she tell him the meanings of the runes on the two beds. ‘Easily done,’ she said, and told him that they meant:

Glide, glide, my good bed,
Wherever I want to go.

That was all fine, he said, but she would have to tell him one thing more – namely, what did the two of them do in the woods all day?

‘We go hunting for birds and animals,’ said the giantess, ‘and when we are resting we sit beneath an oak tree and toss our life-egg back and forth between us.’

Prince Hlini asked what would happen if it broke. That would never happen, the giantess told him, but if it did, they would both die. Hlini told her he was well pleased she had confided in him, but now, he said, he was tired and wanted to rest till morning.

‘As you wish,’ said the giantess. 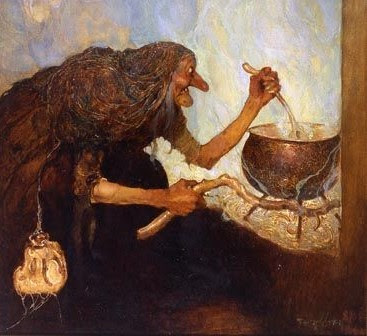 Next morning she woke the prince for breakfast, which he accepted. Then she offered to let him come out into the woods with them, but he told her he preferred to stay home. So the giantess put him to sleep and left with her companion.

Once Signý was sure they had gone, she crept out of hiding to wake the prince. ‘Now let us go out into the woods where the giantesses are,’ she said. ‘Take your spear, and when they start tossing their egg, throw the spear at it and be sure not to miss, for your life depends on it!’

The prince agreed to this plan, and they stood together on the bed, saying:

Glide, glide, my good bed,
Out into the woods.

The bed took off at once and didn’t stop until they reached a huge oak tree deep in the woods. There, Signý and Hlini heard roars of laughter. Signý told the prince to climb down into the branches. He did, and there below him he saw the two giantesses, one of them holding a golden egg in her hand. She tossed it to the other, and at the same time Hlini flung his spear. It struck the egg, breaking it, and the giantesses fell to the earth and died.

Then the prince climbed down from the oak, and he and Signý returned to the cave. They collected everything of value, loaded it on to the beds and flew straight to Signý’s cottage with all the treasure. The crofter and his wife welcomed the couple with joy, and Prince Hlini stayed at the cottage that night.

Early next morning, Signý went to the palace, stood before the king and hailed him. ‘Who are you?’ the king asked, and she told him she was just the crofter’s daughter from outside the grounds, and asked him what he would say if she brought back his son. The king replied that the question was not worth an answer, she would hardly be able to find his son, ‘since none of the men in my kingdom have been able to.’ Signý asked again whether he would reward her in the same way as he had promised the others, if she brought the prince home. The king said he would.

With that, Signý went back to the cottage and bid the prince come with her to the king’s palace, where she led him before his father. The king rejoiced to see his son, and asked what had happened to him since the time he was parted from his men. Sitting down on a throne, Hlini invited Signý to sit beside him, and told all his story just as I have done here. He added that he owed his life to Signý and he begged his father’s permission to marry her. The king gave his consent and a great feast was prepared. The wedding lasted a week, all the noblest people in the country were invited, and the prince and Signý loved each other long and well. So ends the story!

Posted by Katherine Langrish at 01:41