Strong Fairy Tale Heroines #24: HE WHO LAUGHS AT OTHERS, OTHERS SHALL LAUGH AT HIM 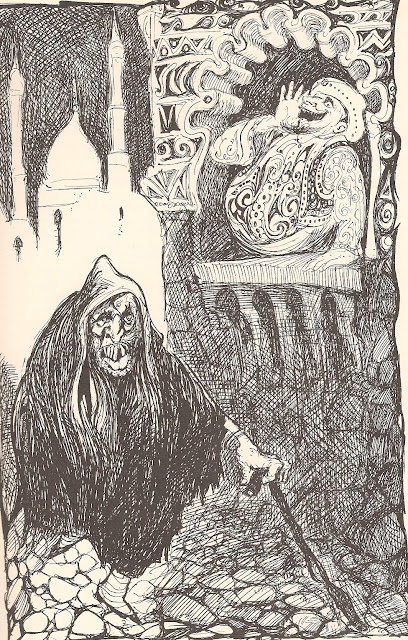 What I love about this very satisfying Armenian fairy tale is that the heroine is an ugly old witch. Not a beautiful maiden - not even a maiden enchanted to seem old and ugly, like Sophie in Diana Wynne Jones’s ‘Howl’s Moving Castle’. No! She is what she is. And although she can use her magic to make herself seem young and pretty, she doesn’t want to. She knows her true self and has the strength and self-knowledge to prefer her real appearance to any illusion, and to ignore jeers and laughter. In the end, though, the continued mockery stings – and she decides to do something about it.

You may also enjoy the snappish exchange, around the mid-point of the story, between the Queen and the rather useless King.

The tale was told c. 1900 "by the illiterate labourer Manuk Avdalian in the village of Koph, province of Taron", collected by I. Orbeli and S. Taronian. It was translated into English and published as 'The Mocker Mocked' in ‘Armenian Folk-tales and Fables’ by Charles Downing, OUP 1972. The illustration is by William Papas.

I don’t know who and where and when exactly, but once upon a time there was a King of a land in the East who, when he had finished his work for the day, was in the habit of sitting at the window of his pavilion to watch the people passing by. One day he looked out and caught sight of the most weird and fantastical little old woman scurrying by under his window. So comical indeed was she that he burst into gales of loud laughter, almost strong enough to split his sides.

“Never have I seen such a ridiculously hideous old crone!” he declared. “She must be some sort of she-devil, one that haunts the bottom of a well!”

The poor old woman heard all this, but paid no attention to it and went on her way.

Well! One day, one week, one month later, when the King was again seated in his window, he caught sight of the old woman once more. As soon as he clapped eyes on her, up went the loud hoots and guffaws, and he laughed and laughed until the old woman finally lost patience. She came to a halt beneath his window.

“Laugh away, go on! Laugh!” she cried. “We’ll soon see which of the two of us laughs last!”

So saying, off she went.

Now don’t say a word to anyone, but between you and me this old woman was a sort of witch, able to take on any shape or form she wished. One day she might appear as a fine-grained angel, the next as some monstrous devil; she could turn the ugly into the beautiful and the fair into the repulsive; she could make the brainless clever and the intelligent stupid.

Well, that’s everything you need to know about the old woman, I don’t need to go on about it. Enough is enough. So this silly King just can’t give up his bad habit; the more he sees the old woman, the louder he laughs, until one day he goes too far and touches her to the quick. Unable to bear the ridicule any longer, she changes her shape and form, turns herself into a pretty young woman and goes to see the Queen.

“Your majesty,” she says, “I am as dust beneath your feet. My husband has died, leaving me with many little ones. Will you not hire me, as your maid, perhaps? I should come early in the morning, see to everything and go home in the evenings. That way I could earn enough to keep my children.”

“Well why not?” said the Queen. “You seem a pleasant, well-favoured body. You may bathe me and comb my hair. It’s my day of the week for a bath, so let us go now.”

They went to the bath-house, where the Queen had a good wash and then came out of the water. The witch took her comb and began to comb her hair – and no sooner did her hand touch her, than the Queen turned into a hideous old woman, so hideous indeed that the devil himself would have blanched to look at her! When the Queen saw herself in the mirror she had such a fright that she screamed out loud.

“King! King!” she yelled. “Come quickly!” And at the sound of her voice, the witch vanished.

The King ran up – looked – and saw that his wife’s nose had grown to an enormous length, her lips hung down to her bosom, her hair was as tangled as tree-roots, and as for her face, it was so grey you might have supposed someone had flung a shovelful of ashes over her.

“Wife, what has happened to you?” cried the King. And the Queen explained as best she could.

“A pretty young woman came along and begged me to employ her as a maid. When I had taken my bath, as soon as her hand touched me I was changed into the hideous monster you see. Do something!”

“Find that woman!” snapped the Queen.

Now the King was completely at a loss, not knowing which way to turn. Among a million women in the city, how could he find the one who had acted as the Queen’s maid? Ah well, to work! Let him get on with it, while we return to the witch.

As soon as the witch got home, she changed shape again and resumed her true, fantastical guise. Her conscience began to prick her, though, and in the end she got up and went to see the King. But when she arrived at the door of the pavilion, the guards wouldn’t let her in.

“Be off, you horrid old creature!” they cried. “The royal pavilion is no place for the likes of you!” And so saying, they thumped and shoved her, and shouted so loud that the noise of it reached the King.

The guards pointed at the old woman, and stupid he may have been, but a glimmer of sense passed for once through the King’s head.

He led her into the pavilion, sat on his throne and beckoned the old woman to stand before him. “What is your wish?” he asked.

“Your majesty,” said the witch, “I am the old woman you are always laughing at. Now do you see how your mockery has rebounded on your own head? If you want to know, I am the one who turned your wife into an ugly old woman. Are you still laughing?”

“Ah, woman!” said the King. “Now is a chance to make your fortune!  Turn my wife back to what she was before, and I shall give you your weight in gold!”

“What are you laughing at?” said the King.

“What then? Why shouldn’t I laugh, now it is my turn?” mocked the witch. “Listen to me, King! When you laughed at me, I thought to myself that there could be no one more stupid in all the lands of the East. What you do to others shall fall on your own head. I am sorry for your wife, not you. Call her, and I shall turn her back into the pretty woman she was before. And from now on, perhaps a little good sense shall dwell in your head, and you will not be so ready to laugh at people in future!”

The witch reached out her hand, and the hideous Queen turned back into a beautiful lady. And before the King could say a word, the witch vanished. From that day forth, they say, the King never again made fun of the faults of others.

Posted by Katherine Langrish at 03:40

Email ThisBlogThis!Share to TwitterShare to FacebookShare to Pinterest
Labels: Armenian fairytales, Armenian Folk-tales and Fables, Charles Downing, He Who Laughs At Others, Katherine Langrish