'From Spare Oom to War Drobe: Travels in Narnia with my nine year-old self'

At the end of this month my book about Narnia will be published – 'From Spare Oom to War Drobe', Darton Longman and Todd, 29th April 2021, £16.99: https://bit.ly/3wHaOYw – and available from all good book retailers. The map on the cover is one I copied as a child from Pauline Baynes' map of Narnia in Prince Caspian. I apologise for blowing my own trumpet! But this book had its genesis both here on my blog and more importantly, in the absolute and utter love I had for the Seven Chronicles when I was a child. I read and re-read them until the covers were dog-eared and creased and coming to pieces. I almost – almost! – believed Narnia to be real, and I desperately wanted to read more stories about that magical land.

Do you remember this passage from The Last Battle? It comes near the end, when Tirian, Jill and Eustace, with Puzzle the donkey and Jewel the Unicorn, are walking through the springtime woods hoping (it is a forlorn hope) to meet Roonwit the Centaur leading reinforcements from Cair Paravel to defeat the forces of evil. While they walk, Jewel begins telling Jill about the long and mostly peaceful history of Narnia:

He spoke of Swanwhite the Queen who had lived before the days of the White Witch and the Great Winter, who was so beautiful that when she looked into any forest pool the reflection of her face shone out of the water like a star by night for a year and a day afterwards.

He spoke of Moonwood the Hare who had such ears that he could sit under Cauldron Pool under the thunder of the great waterfall and hear what men spoke in whispers at Cair Paravel. He told how King Gale, who was ninth in descent from Frank the first of all Kings, had sailed far away into the Eastern seas and delivered the Lone Islands from a dragon, and how, in return, they had given him the Lone Islands to be part of the royal lands of Narnia for ever.  … And as he went on, the picture of all those happy years, all the thousands of them, piled up in Jill’s mind till it was rather like looking down from a high hill on to a rich, lovely plain full of woods and waters and cornfields…

I wanted very badly to know these stories in full. So I tried to write some of them myself, and this was the result: my very own 'Tales of Narnia'! 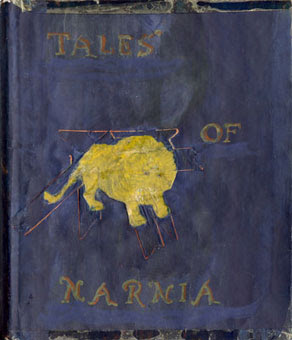 I was wise enough not to attempt a story about Swanwhite, whose whiteness by the way – the warm whiteness of a swan’s feathers – is wonderfully different from the stark whiteness of the witch Jadis whose skin is variously described as white as salt (strong and bitter), white as paper (blank) or white as icing sugar (chokingly sweet).

No, I plumped for King Gale and his dragon. In my story a Talking Stag brings King Gale and his Best Flying Horse Friend, Diamond, terrible news of a dragon attack on the Lone Islands. Leaping into action, Gale and Diamond fly to Cair Paravel where a ship is waiting, and are soon at sea with exciting adventures along the way – like this one:

Suddenly, from the fighting top, the lookout shouted, “Land Ho!” “That’ll be Galma and Terebinthia, won’t it?” the King remarked to Drinian. “Yes Sire,” said Drinian. “And I think –” the King never knew what Drinian thought, because just at that minute, he was interrupted by the lookout yelling “Pirate ship on the starboard side, bearing up on us fast.” “Hm. Terebinthian by her rig,” muttered the King. He was roused by Drinian shouting orders. “All hands on deck, man the guns, look lively!”  At once all the crew came rushing to man and prime the guns… Meanwhile, the pirate was bearing down on them fast. Drinian waited till it was within range, then “Fire!!!” rang out across the ship. When the smoke cleared they could see that she (the pirate) was holed and slowly sinking. “Shall I fire again, Sire?” asked Drinian. “Aslan’s Mane! No! Aslan forbid that I should ever fire upon a sinking ship!” cried the King. “Your Majesty is the mirror of honour,” replied Drinian gravely. … Slowly she sank, until only a whirling, troubled patch of water showed where she had been. 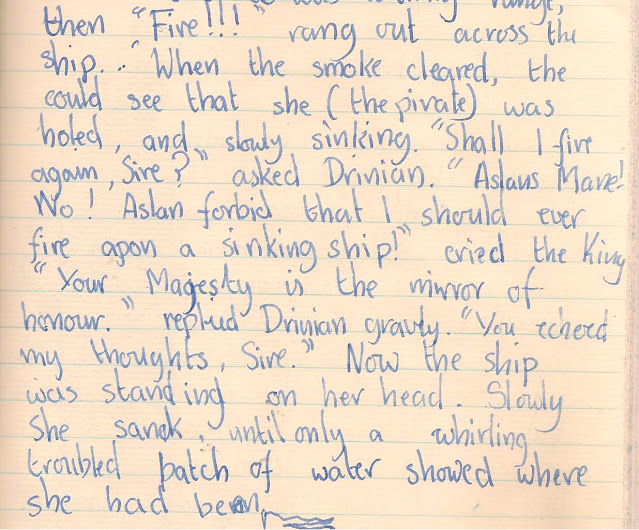 I’m amused by the stiff Narnian dialogue, also that I felt it necessary to explain in brackets that ‘she’ was the ship; and I bet you never knew that Narnian ships carried cannons, let alone such effective ones. And it now seems to me rather a pity that in spite of his vaunted chivalry, Gale makes no attempt to rescue any of the drowning pirates. But in my view back then, baddies were baddies and deserved what they got.

I loved writing these stories, and they taught me at least two important things. First, I found out that I couldn’t write as well as C. S. Lewis. 😕 Second, I found that writing’s a very different pleasure from reading: you don't experience the story, live in it, in quite the same way. I didn't want to stop, though. I went on to write stories about the Seven Brothers of Shuddering Wood and the Lapsed Bear of Stormness and other marginal Narnian characters. My poem about The Beginning of Narnia (no less!) with its awkward rhymes and solemn footnote will probably make you both wince and smile; it does me, but oh, it was heartfelt!

None of these tales of mine really succeeded in satisfying my longing for Narnia. Yet in the process of writing ‘Spare Oom’ over a year ago, I did feel I had at last got back there – in revisiting, reliving my childhood passion for the stories, and exploring with delight the many vivid threads Lewis has woven into the tapestry of his world with references not only to Christianity and the Bible, but to medieval and Renaissance poetry, fairy tales, Shakespeare, Plato and Socratic logic, Lewis Carroll, George MacDonald, Edith Nesbit… he poured into them everything that he loved. Like Lewis himself, the books have their faults, but they still offer a great richness of experience to any child who reads them. I count myself lucky to have been one.

In a free online event on Friday 7th May I will be discussing the book and the world of Narnia with the novelist and critic Amanda Craig.

Register to attend at this link: bit.ly/SpareOomLaunch !

Posted by Katherine Langrish at 03:13