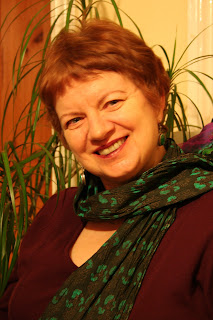 Many people imagine that writing fantasy must somehow be easier than writing realistic or historical fiction. After all, you don’t have to do any research, do you? You just make it all up out of your own head, don’t you? Well, um, no. To be convincing, any fantasy world needs roots in reality – and Mary Hoffman’s wonderful books are an excellent example. A great deal of careful research goes into her fantasies, the well known ‘Stravaganza’ series – as well as into her YA historical fiction like the highly acclaimed ‘Troubadour’, set in the Languedoc at the time of the Albigensian Crusade.

The ‘Stravaganza’ series, beginning with ‘City of Masks’, is set partly in our modern world and partly in an alternate universe’s 16th century Italy: ‘Talia’, which can be reached by cross-dimensional travellers – ‘Stravaganti’ – who are in possession of certain talismans. Each book is set in a different Talian city, based closely on real Italian cities well known to the author. I love the blend of the modern and the exotic in these stories, which besides being magical fantasies also deal with strong emotional themes of illness and death, bullying and persecution.

I think my favourite of the Stravaganza books may be – by a squeak – ‘City of Stars’ in which the heroine Georgia, whose life is made all-too-believably unhappy by her bullying stepbrother, finds the talisman of a little winged horse which takes her to the Talian city of Remora where a dramatic horserace is run. (Anyone who has been to the real Italian city of Siena and experienced the crazy bareback horserace called the Palio will appreciate Mary’s skilfully woven mesh of reality and fantasy.) Here Georgia meets young Cesare – whose beautiful mare Starlight has just given birth to a foal:

The filly was not just dark with the waters of birth, but black, black as the night outside, where the bells of the city’s churches were striking midnight…


The stable door, left ajar by Paolo, moved in a sudden gust of wind. A shaft of moonlight fell across the stall. Cesare gasped.


The little long-legged filly, pulling at her mother’s teat, was rapidly drying in the warm night air. Her coat was a glossy black and she was clearly going to be a first-rate race-horse. But that was not all. As she tried her new muscles, gaining confidence in her spindly legs, she flexed her shoulders and spread out two small damp black wings about the size of a young swan’s.

Mary is an artist to her fingertips – and the most generous of colleagues and friends. Perhaps her choice of fairytale is a case of the attraction of opposites? At any rate, at the bottom of this post you’ll find a brief biography written by herself with characteristic grace and wit. You’ll see why it’s there (and not here) when you’ve read when she has to say about her Fairytale Reflection choice –

THE FISHERMAN AND HIS WIFE
I’m a great believer in the idea that everyone has their own personal myth or, if you like, fairy tale. It doesn’t mean it’s your favourite or that you particularly admire it. It’s more the case that it speaks to you, possibly uncomfortably, about an aspect of your own character or personality, so that you think perhaps the originator of the tale knows you, or someone very like you. 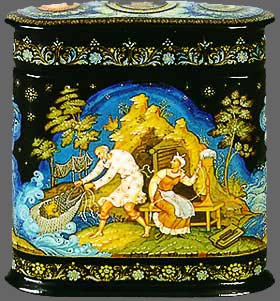 Posted by Katherine Langrish at 01:07