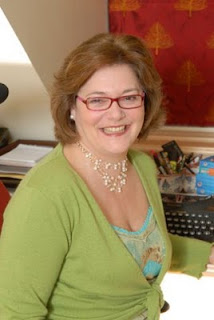 My friend Lucy Coats is very tuned in to magic, myth and fantasy – as you might expect from someone who remarks: ‘I was born in a shrubbery nearly half a century ago and have been looking for fairies in the trees ever since.’ She has written over 25 titles for children, the latest of which are the 12 books of her Greek Beasts and Heroes series, published throughout this year by Orion. And it’s partly to Lucy I owe this idea of the ‘Fairytale Reflections’ – inspired by the fascinating ‘Mythic Fridays’ series of interviews on her blog Scribble City Central.

Lucy is, in fact, very very cool. It has to be cool to have your own stone circle, right? Well, Lucy has one. She mentions it on her website quite casually, almost in passing – as though, well, doesn't everyone have one?  She built it herself: seven upright stones surrounding an inner circle of seven trees which are, naturally, the Seven Sacred Trees of Britain. (I’m rather ashamed to say I can't guess all of them. Oak and Ash and Thorn, for sure, but the others...?  Alder?  Willow?  Elm?)

Besides the Greek Beasts, Lucy is the author of the splendidly titled ‘Hootcat Hill’, a vigorous and charming fantasy for older children, set in an ever-so-slightly different version of modern Britain where children learn ‘Frankish’ at school instead of French, and look forward to university at Oxenfoord rather than Oxford. Here, in a little village called Wyrmesbury, young Linnet Perry discovers her true identity as the Maiden, one of the seven Guardians whose duty it is to quell the waking of the dreadful worldwyrm. The Guardians are figures from deep folklore, cleverly reimagined in modern guise, such as 'Wayland Smith' now working as a garage mechanic and panel-beater, or ‘Fay Morgan’ who owns the ‘chymists’ shop on the High Street. Here, they arrive together at Hootcat Hill:


The roar of a powerful motorbike at the foot of the hill drowned out the hooting for a moment and then fell silent. Two figures, one very large, the other considerably shorter and rather plump, came up Hootcat Hill towards the trees. Each made a quick twisting sign as they reached the mist that surrounded the Owlstones…


Fay Morgan wore a green cloak, and she carried a silver cauldron under one arm. Wayland Smith was dressed in bright red bike leathers, embroidered with silver sledgehammers.

The book is written with wit and a light touch. Linnet’s father Merrilin brews experimental beers like the ‘Monster Brew’ which provides the adventurous drinker with (temporary) additions such as horns, fangs, or a forked tail. I’m off to the pub tonight myself, to my brother’s folk music session, and I feel quite sure that ‘Monster Brew’ would go down very well at The Greyhound.

And of course, it’s very nearly Halloween. Not a fact either Lucy or I had noticed, and we didn’t plan it this way, so I can only put it down to the influence of that stone circle that her post this week just happens to be about one of most fearsome witches in faery lore... 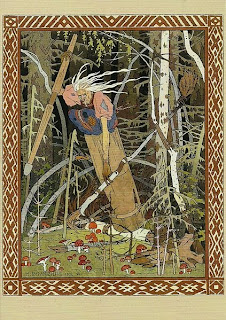 
I can no longer remember where my fascination with Baba Yaga began. It may have been Arthur Ransome and Old Peter’s Russian Tales who introduced me to her, but I think not.  Having a set of Russian cousins probably meant that somewhere, somehow, I was first told of her via whispered under-bedclothes tales of the witch with iron teeth, who lived in a house with chicken legs behind a bonefence of bright-lit human skulls.  What a fabulous story!  I was immediately hooked for life.
For me, she is the ultimate über-witch; the one all other fairytales imitate and fail to surpass. She has, variously, black iron teeth, a skeleton-leg, a sharp, beaky nose with excellent smelling skills, poor eyesight, no talent whatsoever for fine cooking, warts (and what is a witch without warts?), wheezy breath à la Darth Vader and a temperament which swings in a moment from mildly benevolent to seriously inimical. Her mode of travel is to climb into a large iron mortar, and row herself about the sky with a pestle, sweeping out her tracks with a silver birch besom as she goes—so much cooler than a mere broomstick in my opinion.  (Here she is coming through the forest in a painting by Ivan Bilibin)
Baba Yaga was not always a fairytale figure for children, I think.  Her roots go right back to that most ancient of world mythological figures, the triple-aspected Great Goddess in her function as Crone.  Some folklorists deny this, but for me it makes perfect sense.  Having studied shamanism and matriarchal religions for many years, I see in Baba Yaga all the key elements which make up the dark side of the goddess-as-wisewoman as well as weaving links between her and the Moirae/Parcae, the Morrigan, and the Norns.  I think it is telling that Baba Yaga is never the star in her own stories, but always appears in a major supporting rôle, a sort of dea ex machina whose actions or advice determine the future course of the hero or heroine’s life.  To brave young men who know how to enter her dancing chicken-leg hut she usually (but not always) shows her more benevolent side, giving advice and shelter; but to equally brave young women she is invariably less kind, making them do many impossible tasks before she will help them.
The Baba Yaga fairytale-myth is endlessly changing (I am reliably informed that she has about 26 different names), depending on which area the story comes from—and there are many many versions of it, some of which feature Baba Yaga only in passing. Baba is an Indo-European word meaning, loosely, old woman, but it can also be linked to demons and weather conditions (in Poland, when there is rain and sun together, the children chant: ‘Rain is falling, sun is shining, Baba Yaga’s butter’s churning’). Yaga may come from an old Slavonic stem meaning evil, sickness or nightmare.  I also find it fascinating when fairytale-myth and reality collide—it is entirely possible that the idea of Baba Yaga’s hut on chicken legs came from the Finnish nomadic-hunter tradition of cutting down two trees close together to a height of about ten feet, and building a hut on top to prevent access to food and stores by wild animals.  The exposed roots of the dead trees would have looked like chicken feet. 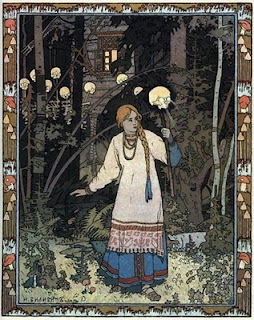 The best-known Baba Yaga tale (and my own favourite) involves Vassilisa the Fair, and is a type of Cinderella story crossed with the classic maiden-on-a-quest fairytale. Re-reading it for this piece together with Clarissa Pinkola Estes’ classic psycho-commentary from Women Who Run With The Wolves reminded me what a revelation this kind of delving into the deeper meanings of fairytale was to me when I first came across it.  As a child I knew the tale as an exciting adventure with all the elements I liked—a bit of sadness, a brave heroine (I always preferred heroines), baddies at home, a scary witch and a quest against all odds with a satisfyingly bloody ending.  To discover, when I was older, that it is a story about the importance of listening to one’s intuition, about facing the dark side of one’s character, about growing up into a woman’s power, made me look anew at all fairytales and reinforced their importance for me, not just as fireside tales, but as key signposts for life itself.
In the case of Vassilisa, well, who would not wish to have a little doll in the pocket to take advice from?  For me, intuition (the doll), is a big part of my writing armoury.  The ‘doll place’ is where I go when I get stuck.  “Sleep now, all will be well,” says the doll, when Baba Yaga gives Vassilisa the impossible task of sorting a million poppy seeds from a pile of dirt.  Sometimes, when I get bogged down in a story, that’s just what it feels like—impossible to go on, impossible to sort out.  But, as I have written elsewhere, I find that handing over to the intuition doll and going to sleep while she does the hard work is a marvellous solver of story problems.
Then there’s the wicked stepmother and sisters.  They are the voices in my head—the ones that tell me I’m useless and not good enough; that I can’t do it, and I never will; that I should just give up now because really, who am I to dare...?  For me, they are the true demons, not Baba Yaga at all.  She’s the one who teaches hard but important lessons and gives the essential gift of the fire of confidence.  She may make me work damned hard for it, and challenge me at every turn—but if I can use my brain, if I can listen to the doll, if I can complete Baba Yaga’s tasks, carry her reward of a fiery skull through the dark forest and burn up the sneering demons, then I will have a story to tell at the end of it all—and what a hell of a story it will be!

Posted by Katherine Langrish at 01:05