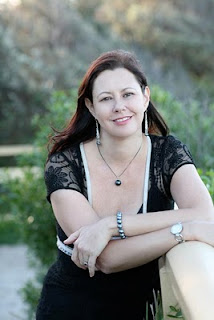 One of the very best things about having started this blog – almost a year ago now – is the friends I’ve made because of it. One of these is the Australian fantasy writer Kate Forsyth, who emailed me way back in February to say she thought we might have a lot in common – and do we just!


For a start, I discovered that Kate, whose books until then I’d unaccountably not picked up although I’d seen them everywhere – had read and loved almost the identical set of childhood books that I had. It was as if we had been leading parallel reading lives, on opposite sides of the globe. She sent me her book ‘The Puzzle Ring’ (which I reviewed here) and I was swept away not only by the drive of the narrative and the delicate strength of the writing, which reminded me of Elizabeth Goudge’s children’s fiction, but by the deep knowledge Kate has of British folk-and-fairylore. Who but Kate would send the Blue Men of the Minch to endanger her heroine on a perilous sea crossing? Or give us a glimpse of the terrifying Nuckelavee in a throng of the faery folk under the hill –

One of the most awful sights was a creature like a centaur, except that it had no skin. Hannah could clearly see the knotted muscles and blue, pumping veins running all over its body. The man-figure upon its back carried a spear in its long, skinless arms, which it beat in time to the jester’s song.

If there’s anything better than discovering an author with whose books one is utterly in tune, it’s discovering a friend, ditto. With a happy sigh, I sat back to read my way through Kate’s books – which will take a while, since she’s the bestselling author of over twenty titles. Her first book was named a Best First Novel of 1998 by Locus Magazine, and since then she’s been shortlisted for many awards, including a CYBIL Award in the US and the Surrey Book of the Year award in Canada. In 2007, five of her Chain of Charms series were jointly awarded the 2007 Aurealis Award for Children’s Fiction.


When Kate came to London this year in the early summer, we were able to meet – and talked nineteen to the dozen for the entire afternoon about faeries, folklore and fantasy. And so I feel as though I’m only continuing that conversation as I step back to allow her to tell you about a fairytale with much personal resonance for her, which is the basis of her next (adult) novel. It is the fairytale of – 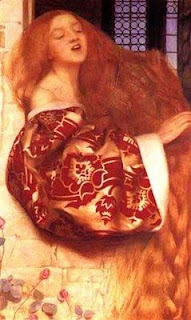 Rapunzel is one of the most mysterious and enduring of all fairytales, telling the story of a young girl sold to a witch by her parents for a handful of bitter green herbs.


The witch locked her in a tower deep in the forest and visited her by commanding, ‘Rapunzel, Rapunzel, let down your hair, so I may climb the golden stair’. One day a prince, entranced by Rapunzel’s singing, called up the same rhyme to the imprisoned girl who lowered her hair to him. He climbed up to her room and they fell in love at first sight. Before the prince can help her escape, the witch discovers their tryst and banishes Rapunzel to the wilderness where she gives birth to twins (who are later cut from the story by the Grimm Brothers who found the babies hard to explain to a young audience). The prince is cast down from the tower and blinded by thorns, but Rapunzel finds him and her tears miraculously heal his eyes so they can live happily ever after.

I have been fascinated by the Rapunzel tale ever since I was a child myself, and I am now working on a novel called Bitter Greens which retells the fairytale as a historical novel set in and northern in the 17th century and France in the 18th century.


When I was two years old, I was savaged by a dog and ended up with terrible head injuries that resulted in meningitis (infection of the membranes that surround the brain) and encephalitis (a life-threatening inflammation of the brain). I was very ill for months, spending most of that year in hospital and ending with dreadful scars all over my head (thankfully most of them are hidden by my hair). I had half of one ear torn off and my left tear duct was destroyed, and with it my ability to control my tears. My eye wept all the time.


As a result, I was in and out of hospital for the next six or seven years, half-blind and racked with fever. I used to lie in my hospital bed, all alone in an empty children’s ward at the , staring with my one good eye out the window. All I could see was a high green hill, crowned with an ancient fig tree and the sandstone wall of the Art Gallery of NSW. It looked like a castle. I used to imagine myself galloping away over the hill, on my way to marvellous adventures.


I think my fascination with Rapunzel began with my own entrapment in that lonely hospital ward. Again and again I write about people imprisoned in towers and dungeons, longing to be rescued. It is a recurring motif in my novels, most recently in my fantasy adventure for children, The Wildkin’s Curse, which tells the story of a wildkin princess kept captive in an impossibly tall crystal tower, telling stories to try and free herself.


I love the story of Rapunzel because of the ardent love affair between the imprisoned girl and the prince who rescues her, and because of the miraculous healing of the prince’s eyes by Rapunzel’s tears. Rapunzel begins as a powerless child-like victim but by the end of the story she has become a magical agent of healing and redemption.


Most people think that Rapunzel was first told by the Grimm Brothers in the early 19th century, but in fact it is a much older story than that.


There are numerous Maiden in Tower stories in cultures all around the world, so many it has its own classification in the Aarne-Thompson fairytale motif index, Type 310. The first may well be from Christian iconography, with the story of Saint Barbara, a virtuous young girl locked in a tower by her father in the 3rd century. She was tortured for her beliefs, but all her wounds were miraculously healed overnight and in the end she was beheaded by her own father, who was then struck by lightning and killed. 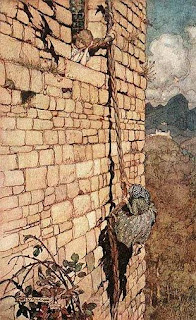 The very first time the motif of the ‘hair ladder’ appeared in a fairy story was in a 10th century Persian tale told by Ferdowsi (932-1025 AD), in which a woman in a harem offers to lower her hair to her lover, Zal, so he can climb up to her. He is afraid he might hurt her and so throws up a rope instead.


The ‘hair ladder’ reappears in the story, Petrosinella, in the mid 17th century, as part of a collection of literary fairy tales told by a Florentine writer, Giambattista Basile. His collection, Lo cunto de li cunti (The Tale of Tales), was first published in 1634-36 and told the story of a princess who could not laugh. Various storytellers gathered to tell her stories in the hope they can amuse her, including one who tells the story of a girl, Petrosinella (Little Parsley), who is given up to an ogress after her mother steals parsley from the ogress’s garden. The ogress locks Petrosinella up in a tower in the forest, using her hair as a ladder to access the building. Petrosinella escapes with the help of a prince who heard her singing, overcoming the ogress by casting three magical acorns behind her that turn into obstacles that impede the witch and ultimately devour her.


Sixty years later, the story appears again, this time in . It is told by a woman writer, Charlotte-Rose de Caumont de la Force, who has been banished to a convent after displeasing the king, Louis XIV, at his glittering court in . Locked away in a cloister, much like Rapunzel is in her tower, Charlotte-Rose was among the first writers to pen a collection of literary fairy tales and one of the world’s first historical novelists. Published under a pseudonym, Madame X, Charlotte-Rose’s tales became bestsellers and she was eventually able to buy her release.
In Persinette, her version of the tale, the mother conceives an insatiable longing for parsley which her husband steals for her from a sorceress’s garden. Caught by the sorceress, he promises her his unborn daughter who the sorceress collects at the age of seven. Persinette is raised by the sorceress until she is twelve and then locked away in her tower (though the sorceress treats her gently and brings the child everything she could possibly want.) In time she becomes a woman; the prince hears her singing and chants the rhyme so he can climb up the ladder of hair to her room, where he seduces her (“he became bolder and proposed to marry her right then and there, and she consented without hardly knowing what she was doing. Even so, she was able to complete the ceremony” is how Charlotte-Rose rather coyly describes his seduction.)


Persinette becomes pregnant as a result, and in her naivety betrays herself to the sorceress when she complains about her dress growing tighter. The Grimm brothers later changed this to Rapunzel complaining about how much heavier the witch is than her prince, which at a single stroke makes Rapunzel seem extremely stupid.


Then Charlotte-Rose changes the ending so that the prince is blinded, Persinette bears twins in the wilderness, and then heals her lover’s eyes with her redemptive tears. The sorceress continues to torment them, until the young couple’s courage and tender love for each other move her to mercy and she magically returns them to the prince’s loving family.


This story was then retold in by the German author Friedrich Schulz, which is almost identical to Charlotte-Rose’s story except that he changed the girl’s name to Rapunzel, perhaps because it is prettier than parsley. A rapunzel plant is a type of wild rampion. It was then retold by the Grimm Brothers in their 1812 fairytale collection, becoming less powerful, dark and sexy with each edition until we have the tale that most children know today (soon to be retold once again, and released as a Disney cartoon.)


It is Charlotte-Rose and her version which provide the inspiration for my book. She was a fascinating woman – strong-willed, intelligent and fiercely independent – who once rescued her lover from imprisonment by going into his parent’s castle with a travelling troupe of performers disguised as a dancing bear! How could I not write a book about her?
Posted by Katherine Langrish at 01:37