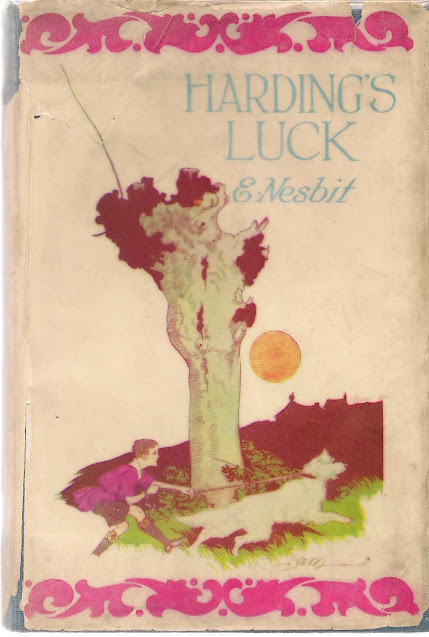 Delia Sherman on a favourite time-travelling hero
Harding’s Luck  (1923) is not one of E. Nesbit’s better known titles, so I was delighted when Delia Sherman chose it as her ‘Magical Classic’; I love it too. It’s the story of young Dickie, lame and poor, who lives in a London back street near New Cross:

At least the address was New Cross, but really the house where he lived was one of a row of horrid little houses built on the slope where once green fields ran down to the river, and the old houses of the Deptford merchants stood stately in their pleasant gardens ... All those good fields and happy gardens are built over now.  It is as though some wicked giant had taken a big brush full of yellow ochre paint, and another of mud-colour, and had painted out the green in streaks of dull yellow and filthy brown; and the brown is the roads and the yellow is the houses.

One day Dickie sows a packet of Artistic Bird Seed in his wretched little back yard, hoping that they will 'come up parrot-coloured': and up comes a moonflower: a great flower like a sunflower, only white.

“Why,” said Dickie, “It’s as big as a dinner plate.” It was. It stood up, beautiful and stately, and turned its cream-white face to the sun.
“The stalk’s like a little tree,” said Dickie, and so it was.  It had great drooping leaves, and a dozen smaller white flowers stood out below it on long stalks, thinner than that need to support the moonflower itself.  “It is a moonflower of course,” he said, “if the other kind’s sunflowers. I love it!  I love it!  I love it!”

Dickie’s adventures really begin when he tries to exchange the flowers for his only treasure, a silver rattle he calls Tinkler, which his aunt has pawned. Before long he's off on adventures with a kindly but unscrupulous tramp called Beale, sleeping out of doors in 'the bed with the green curtains' and being used – as Oliver Twist was – for a burglar's assistant. Caught, he returns home to find his house empty and his 'aunt' gone. Alone in the moonlight, he makes a pattern with the moonflower seeds, a six-pointed star. 'And then the magic began’ – and lame little Dickie Harding is transported into the past by two of E. Nesbit’s magical creatures, the white mouldiwarps, to awake as Richard Arden, heir to a great house – and no longer lame. But which life is real?

Here is Delia to tell you more.

I can’t remember when I first read E. Nesbit or even which book I began with, except that it was not The Railway Children.  I think it must have been Harding’s Luck, though, because I am much attached to Harding’s Luck in that wide-eyed, delighted, unquestioning way one is attached to books read as a child.  I do know it is one of the influences that pushed me towards my life-long obsession with Renaissance England and time travel and even issues of class and poverty and privilege and noblesse oblige and nature and nurture, all these things being very central to both the text and subtext of Harding’s Luck.
I was also, I fear, much influenced by Nesbit’s episodic plotting, slightly arch Edwardian prose, and tendency to fall into dialect and obsolete idiom given the slightest excuse.
Many years later, I still love Harding’s Luck.  Dickie Harding is one of my favorite Nesbit heroes.  He is refreshingly matter-of-fact about his disability and the difficult, hard-scrabble life he lives with the drunken, abusive woman he calls his aunt.  They are what he knows, and he makes the best of them without self-conscious heroism.  Not unnaturally, he’s a good liar, and does so cheerfully until he learns better on his first trip into the past.  While Nesbit sets him up to become saintly, he never becomes a plaster saint, too good to be true or truly likable.  He has a sense of humor and a temper and a romantic streak that make him feel very real, and very suited to the 17th century life he choses in the end.
Which is the life I would have chosen, too, given the way Nesbit writes about it.  The clothes, the people, the society she describes are pure story-book, absent the dirt, disease, poverty, drink, and abuse so feelingly rendered in the “modern day” Edwardian plot.  Yet it is tremendously satisfying that Dickie, who takes refuge from the miseries of his life in romances like Charles Kingsley’s Hereward the Wake, be allowed to live exactly the life he’s longed for, full of honor and love and beauty, where danger is a matter of choice, not happenstance, not to mention magical moles who twist time to give children wonderful adventures.
May I confess that when I picked up Harding’s Luck for this re-read that I’d forgotten all about the mouldiwarps?  I remembered Tinkler and the moon seeds and Dickie and the bed with green curtains fondly, and greeted their appearance with joy, but the Mouldiwarps came as a surprise.  To me, they are peripheral to Dickie’s story, and, as charming as they are, I wish she’d left them out. Perhaps this is just me not liking the book’s prequel, The House of Arden, very much, or its scatterbrained protagonists, who are constantly having to be rescued from the consequences of their shortsightedness by the family talpae ex machina.  It was a pattern that worked well enough in the Psammead books, but I just can’t warm to Edred and Elfrida—in this book, either.
Rereading Harding’s Luck has reminded me that I love Charles Kingsley, too.  Now I shall have to go reread Water Babies.  And possibly Hereward the Wake.
Delia Sherman writes historical/folklore/semi-comic fairy stories with a serious twist.  Her short fiction and poetry has appeared in many anthologies.  Her adult novels are 'Through a Brazen Mirror' and 'The Porcelain Dove' (which won the Mythopoeic Award) and, with Ellen Kushner, 'The Fall of Kings'.  She is the author of two novels for younger children, 'Changeling' and 'The Magic Mirror of the Mermaid Queen', featuring impetuous, warm-hearted Neef, the official changeling of New York's Central Park. Her most recent novel is The Freedom Maze (2011). Set in Louisiana in 1960 -- and 1860 -- it is a fantasy novel that uses the device of time-travel to explore themes of slavery, courage, womanhood, and family ties. Though ostensibly aimed at young-adult readers, the historical research underpinning the novel makes it accessible to anyone with an interest in US history. The novel won the 2012 Prometheus Award [1] and the Andre Norton Award.