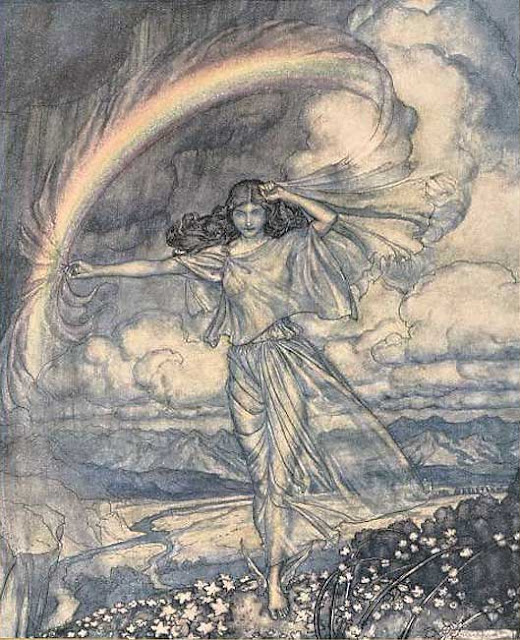 Oral storytelling necessitates a framework. Anyone who’s tried singing or storytelling, or any kind of performing in a crowded public space, knows that you have to call for attention before you can begin. That’s why Shakespeare’s plays often begin with a prologue – a man standing on the stage to deliver a speech about the background to the drama, or a couple of minor characters loudly joking and quarrelling, or a shipwreck with lots of dramatic sound effects  – something that won’t matter if you miss half of it, something to shut the audience up and make them settle down and pay attention.

A song will begin with a chord or a run of notes upon the harp or guitar, and the beginning of a story is signalled by a stock phrase: ‘Once upon a time’. It’s a device to arrest the listener and locate the story in a place and past that never was, yet is still relevant. ‘Il était une fois’, or ‘Es war einmal…’or ‘It wasn’t in my time, or in your time, but once upon a time, and a very good time it was…’

And this sort of opening phrase sends a subtle but distinct message to listeners.  It says: ‘Pay attention!’; but it also says: ‘Though this is going to be amusing or stirring or exciting, it’s probably not true.’  It says, ‘This is a story.  Sit back and listen.’

And so the room hushes, the people attend, the storyteller spins her tale. There’s a real physical element to listening to a story. It’s like going on a roller coaster. It’s not like reading, where everything happens at exactly your own pace, and you can glance ahead, or turn back to check on something, or put the whole book down for ten minutes to make a cup of coffee.  Listening to a story, you are in the power of the storyteller.  You must keep still and listen carefully not to miss a word.  You watch her face as she frowns or smiles.  The flash of her eyes, her gesturing hands.  You don’t know what is coming next, or even how long the story is going to be. For she on honey-dew hath fed, and drunk the milk of paradise.  Everything is a surprise.

Some stories are very short.  Some are very long.  Some divide into almost separate segments, picaresque narratives in which one thing follows upon another with the most tenuous of links.  The princess and the prince are married, they become king and queen.  The audience draws breath - but that’s not the end.  The storyteller is still speaking.  The king goes to war, leaving the young queen in the care of his old mother.  But the old woman hates her, and so, when the queen gives birth to her first child, the old woman orders it to be killed and the blood smeared over the queen’s clothes so that everyone will think she has killed her own child…

And so, when the end does come, it is often signalled with another stock phrase, to show that the show is over.  Puck delivers the epilogue, Rosalind steps out of the framework of the play to flirt with the audience about their beards. Fairytales conclude with the words ‘and they all lived happily ever after’ – or sometimes, ‘they all lived happily till they died’ – or even, ‘if they haven’t died yet, they are living there still’…

It’s getting more conscious and ironic, isn’t it?

Fairytales, contrary to what people suppose, are not naïve. Their very existence floats in the relationship between narrator and audience. Indeed it is naïve to imagine that ‘happy ever after’ – much derided as a banal or smug or thoughtless conclusion – was ever intended as much more than the signal that the story is over.  The bite of narrative has been chewed and swallowed: the show is done. The listeners can get on with drinking beer, eating, bargaining, gossiping, telling rude jokes, or heading off outside for a piss, or trudging home to their own difficult wife, husband or parent.

Beginnings are important, endings less so, because the stock phrases that signal the end of a fairytale do not call for attention, but dismiss it.  They don’t place the story in the mythic past, they undermine it.  ‘If they haven’t died yet, they are living there still’ (but how likely is that?).  And so fairytale endings are far more varied than beginnings: in fact they can be purposely surreal and disconnected.

‘They found the ford, I the stepping stones.  They were drowned, and I came safe.’

‘This is a true story.  They are all lies but this one.’

‘There runs a little mouse.  Anyone who catches it can make himself a fine fur cap!’

‘Snip, snap, snout – this is the end of the adventure.’

‘And when the wedding was over, they sent me home in little paper shoes over a causeway covered in broken glass’.

Posted by Katherine Langrish at 02:50