Magical Classics: "A Necklace of Raindrops" by Joan Aiken 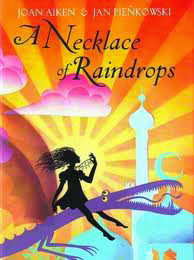 I don’t know how old I was when I read A Necklace of Raindrops. I only know that it caused a tremendous longing in my soul for such a necklace. I was a girly child, fond of tutus and fairy wings, and a desperate desire for my own unicorn. The Necklace fitted perfectly into my romantic visions.

One dark and stormy night (yes, one of those beginnings!), Mr Jones, recently a father, finds the North Wind, personified as a tall man, stuck in his holly tree. On helping him get free, Mr Jones is rewarded by a necklace of three raindrops which the North Wind hands over as a present for his new baby daughter. ‘I will be the baby’s godfather’ he says imperiously. He promises to bring the girl a new raindrop every year on her birthday (the necklace starts life with three raindrops) and each raindrop will confer a new magic power. By the time she has the full set of ten raindrops (on her seventh birthday) she will be able to swim any river, go unharmed in the worst storm, and make it start and stop raining, among other things.

But as always there is a catch. The little girl, named Laura, is not allowed to take off the necklace, otherwise, the North Wind says vaguely, ‘it might bring bad luck’. What kind of a warning is that?

Anyway, Laura grows into a nice little girl who loves her necklace and dutifully wears it all the time – until she begins to attend school. Another girl, Meg, is jealous of Laura’s pretty necklace and so she tells the teacher that Laura is wearing jewellery. The teacher makes Laura remove the necklace, but Meg steals it from its safe place and takes it home. Laura is distraught – all the more so because it’s her birthday soon and her godfather is due to bring the tenth and final raindrop. Meg soon finds that crime doesn’t pay because the necklace doesn’t work for her, and her father takes it away. He sells it and soon it is on a ship, destined as a present for the princess of Arabia.

Laura cries desperately over the loss of her necklace, but in a Disney-like fashion, birds and animals pop up and offer to help her find it. Apparently, she has been kind to them in the past (though the story makes no mention of it up to now – an editor these days would demand earlier references!) and now they become her personal spies, sniffing out information. 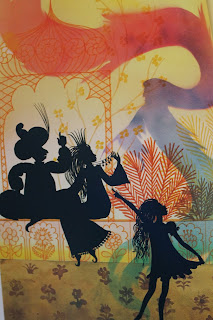 Before long, Laura is on the trail of the necklace and has to take a ride on a friendly dolphin (since she can no longer swim) to Arabia where she begs the princess to return her necklace. In the ensuing argument, the North Wind arrives with the final raindrop. Annoyed that his god-daughter has taken off his present (after nearly seven years!) he lets the raindrop fall onto the grass where it is lost. The princess takes pity on Laura and hands over the necklace, whereupon one of Laura’s tears falls onto the necklace and becomes the final raindrop.

As a child, I was fascinated by the romance in Joan Aiken’s stories. Magic was referred to in such a practical way that it was taken for granted that buses could fly, unicorns could arrive on your lawn, and raindrops could hang from a necklace without falling off. It was the fantastical element that appealed, along with the stunning illustrations by Jan Pienkowski, my favourite ever illustrator.

It is interesting to me that as a writer, I shy away from fantasy now. It was such an enormous part of my childhood, and yet I don’t write fantasy at all. I hardly read it now either, and again I can’t explain why. Perhaps the practical, cynical side of me that says magic isn’t real has shouted down the inner romantic?

And yet…and yet…as I grow older, I find myself seeking out stories with magical elements. Not necklaces or unicorns, but real life experiences that defy rational explanation. And I am more and more attracted to fiction with a romantic edge: not necessarily a falling-in-love one, but a slightly rose-tinted one where people get the happy endings they deserve.

I do think that having children has had something to do with this. I have two young daughters, and for them, every day is magical in the smallest ways. My eldest licks frost from the tree. My youngest echoes the ‘beep’ from the microwave. I have begun to look at the world in fresh ways, noticing the beaded cobwebs in the garden and feeling so disappointed if there is no one to share them with.

And now I am sharing the necklace of raindrops with my eldest. At five and a half, this is the first story that she has eagerly wanted to read for herself. I read it to her, and then she wanted to read it to me. It took us four bedtimes to get through it, but she finished it in the end and the delight on her face was beyond words.

As if I needed any more proof of the power of this fairytale, she presented me with her Christmas list. Under ‘pink mobile phone, Rapunzel Barbie and chocolate coin maker’ she had written ‘necklace of raindrops’. 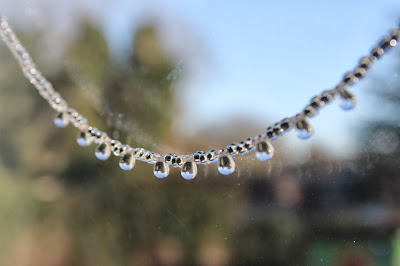 Here is the 'necklace of raindrops' that I made for my daughter this Christmas.  She was very excited to find it in her stocking on Christmas morning!

Jo Cotterill has been an actor, musician and teacher and now writes books at her home in Oxfordshire. She has published 21 books for young people and teenagers, including the critically acclaimed ‘Red Tears’ (as Joanna Kenrick) and her light romance series ‘Sweet Hearts’. Her new book, ‘Looking at the Stars’, a story of inspiration and imagination among refugees, has just been published by Bodley Head.
Posted by Katherine Langrish at 01:00